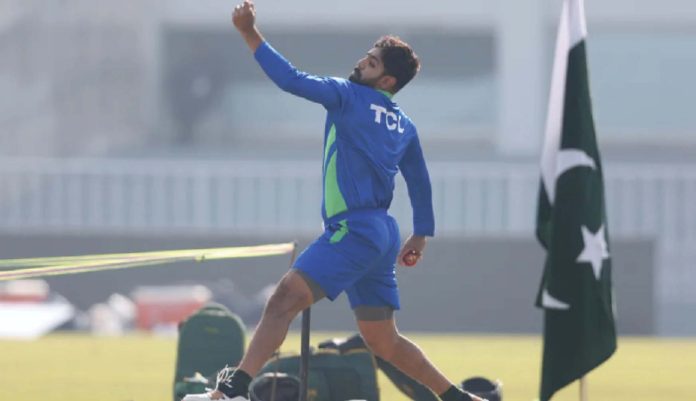 Pakistan fast bowler strained his quad on the first day of his debut Test against England in Rawalpindi
Rawalpindi
Pace spearhead Haris Rauf has been ruled out of the remainder of the Test series against England due to an injury, the Pakistan Cricket Board (PCB) said in a statement on Tuesday.
“A grade-II strain in [the] right quad has ruled Haris out of the Test series against England,” the cricket board said.
The fast bowler underwent a MRI during the first day’s play of the Rawalpindi Test after he “rolled over the ball while fielding,” the PCB said.
It added that scans and subsequent assessment by the medical staff concluded Haris had suffered a grade-II strain.
“Haris will now travel to Lahore where he will begin his rehabilitation at the National High Performance Centre.” The pacer made his debut in the opening Test in Rawalpindi, England which the visitors won by 74 runs to take a 1-0 lead in the three-match series.
Rauf bowled 13 overs taking 1-78 in England’s first innings, but was unable to bowl in the second. He batted with discomfort in both innings.
Pakistan have yet to name a replacement for Rauf, but have a 17-man squad to choose from for the second Test starting in Multan on Friday. Haris’ absence is a further blow to a Pakistan side already missing spearhead pace bowler Shaheen Shah Afridi through knee injury. The second and third Tests will be played in Multan (Dec 9-13) and Karachi (Dec 17-21).