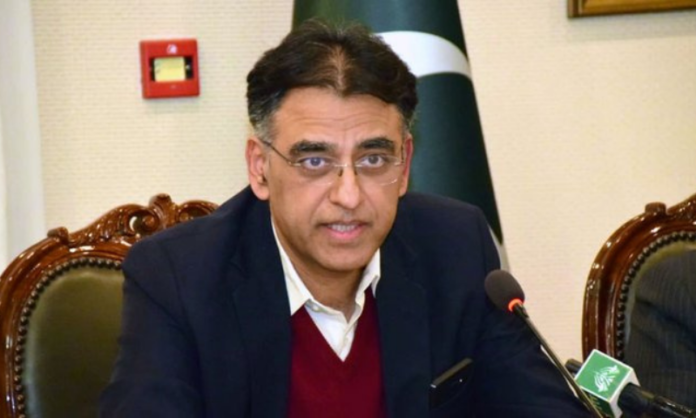 Says situation would get out of control if anything happens to Imran
Our Correspondent
ISLAMABAD
PTI General-Secretary Asad Umar on Thursday said “those who make decisions should listen carefully that history doesn’t forgive anyone.” Umar, while addressing media representatives here, flanked by PTI leaders Umar Ayub and Ali Zaidi, said that “now was the time to make decisions”. “If you don’t decide now, history will not forgive you,” he said. The PTI leader maintained that the incumbent government was “fully responsible for the security arrangements of PTI jalsas, adding that “no one would be able to control the situation if anything happens to former premier Imran Khan.
“Much has been achieved […] the nation has stood up and decided not to bow before anyone except Allah,” Umar said. Umar also said that he does not know when will Imran announce the Islamabad sit-in. However, he said that the party chairman will decide whenever the time is right. He further stated that people from Azad Kashmir, Gilgit-Baltistan, and Khyber Pakhtunkhwa will reach Islamabad for the long march, adding that representation from Sindh and Balochistan will also be seen as the people of Karachi, Hyderabad, Larkana, and Quetta would take to streets in their respective cities.
Turning his guns towards the incumbent government, Umar said that the people of Karachi should ask MQM-P about the amount of electricity the Centre was providing to the city last year in comparison to the amount of electricity being provided by the Centre now. Meanwhile, PTI leader Umar Ayub said that every sector of Islamabad is witnessing electricity load-shedding. “Major cities of the country are facing hours of load-shedding,” he criticised. Taking over the presser, former maritime minister Ali Zaidi took a jibe at Foreign Minister Bilawal Bhutto-Zardari’s US trip and said: “Look at the way this child represented Pakistan in the US.” Zaidi also emphasised that new elections were the only solution to end the chaos in the country.

Cells for talented youth to be set up at ministries for innovative policy-making ideas: PM