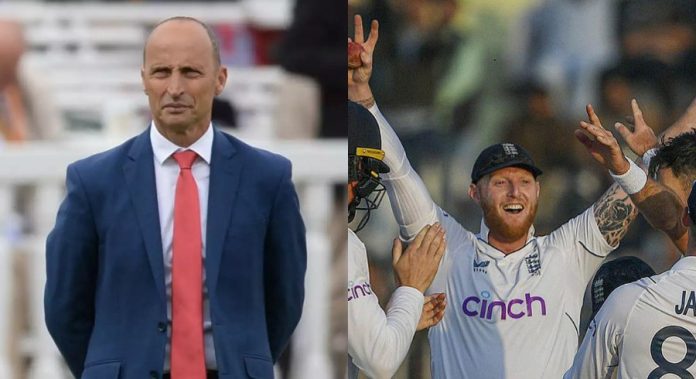 Islamabad
Former England captain turned commentator Nasser Hussain praised Ben Stokes for leading his team to a famous Test victory in Rawalpindi against Pakistan. Ollie Robinson and James Anderson each took four wickets on Day 5 as the visitors defeated Pakistan by 74 runs.
“I do not think I’ve seen a better week of captaincy than what we’ve just seen from that man,” Nasser said. “They had to get everything right to go 1-0 up, and they did.
“It was fitting it was [Jack] Leach with the last wicket because Stokes has backed Leach all the way through since he took over as captain. [With] Brendon McCullum as well off the field, he has changed the culture and the mindset of this England side. Since they took over, eight matches, seven wins, one loss: the Stokes and McCullum era is changing the face of Test-match cricket,” he further added.
Hussain added on international media: “I can’t remember either in my playing days, watching cricket growing up, or commentating, a better performance. A performance where you have to get everything right, burst every sinew, and walk the walk after talking the talk. I would say it is one of their greatest-ever victories away from home.”
“Only 13 captains have declared in the third innings and lost,” Atherton said, “and that tells you that captains generally err to the side of caution in Test cricket when it comes to declarations, especially in the first Test of a series. Stokes erred the other way here, and he got his rewards. It was a fantastic declaration; it was still a lot of runs to get, but this was the flattest of flat pitches.
“All his moves have paid off – tactically and strategically. It has been a masterclass of performance from Ben Stokes, the captain. You always felt it was going to happen. You just felt that, given England had made all the running, the gods were going to look kindly upon them and give them that final wicket. They certainly deserved it.
“I struggle to think of another England team that would have won on this surface, and therefore it’s got to go down as one of the finest of England’s Test-match victories: a brilliant declaration by the captain at tea time.
As we said yesterday, even if that had gone against England today, whether Pakistan had sneaked home or if the game had been drawn, I don’t think you’d have found anybody criticising that declaration.”