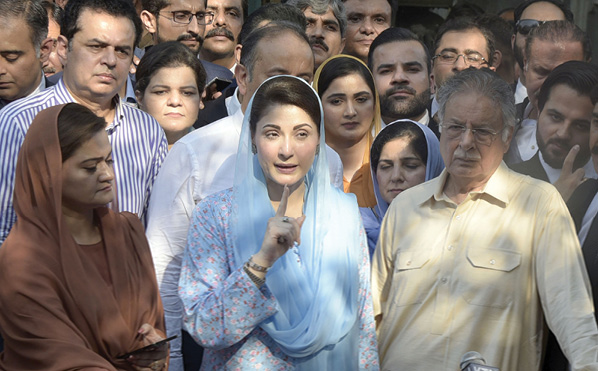 PML-N vice president’s disqualification ends with immediate effect; court declares 7yr imprisonment sentence ‘illegal’
ISLAMABAD
Islamabad High Court (IHC) while nullifying the Accountability Court’s decision in Avenfield Reference has acquitted Maryam Nawaz and Capt (Retd) Safdar.
The case came up before two members bench of IHC comprising Justice Amir Farooq and Justice Mohsin Akhtar Kayani Thursday.
Special prosecutor Usman Ghani could not appear in the court being unwell and in his place NAB prosecutor Muzaffar Abbasi gave arguments before the court.
Maryam Nawaz and Capt (Retd) Safdar appeared in the court along with their counsel Amjid Pervez.
NAB prosecutor Sardar Muzaffar read out case record in his arguments before the court.
Justice Amir Farooq inquired “ will you read it all this Sardar Sahb
The court directed NAB prosecutor to read what is linked to case.
Justice Mohsin Akhtar Kiani remarked can JIT investigator give such statement. We have never seen such type of statement that one investigation officer can give.
NAB prosecutor said he is giving statement as witness not as investigator .
Justice Amir Farooq remarked this is collection of all documents. But how the case is becoming established. We have to see either it is personal opinion or the documents are relevant. Tell us in assets beyond known source of income case how it links to Maryam Nawaz and Nawaz Sharif.
The court inquired tell us cost of every apartment that the property was purchased at what price. Has any document come in regard to property wherein it is said the property was purchased at what cost and when.
The counsel for Maryam Nawaz told the court there are no such documents wherein this all was written.
The court inquired was it accepted in the statement under 342 that the property was purchased at what cost.
The counsel for Maryam Nawaz told the court no mention of this has been made in the statement under 342.
The court inquired is it the only and the best document which was presented in the case.
Usman Cheema said in last hearing Maryam Nawaz role starts from 2006. You are just now saying that Maryam Nawaz role starts from 1993.
NAB prosecutor told the court I make understand the court the case in three lines.
Justice Amir Farooq remarked prove them with evidence what four sentences you have spoken.
The counsel for Maryam Nawaz told the court they have relied upon Rehman Malik report.
NAB prosecutor told the court Nawaz Sharif purchased properties in London when he was Public office holder.
Justice Amir Farooq remarked NAB has no other case except the miscellaneous petitions which have been filed. . Wajid Zia had come to know that cost of properties was 5 million dollars then details could be obtained. Obtaining details of properties was not difficult in any way.
The NAB prosecutor told the court determining the cost of properties was not relevant.
The court remarked you are saying wrong that determination of cost was irrelevant.
The court nullified the sentence awarded by Accountability court in Avenfield reference after hearing the arguments of the respondents and acquitted Maryam Nawaz and Capt (Retd) Safdar.