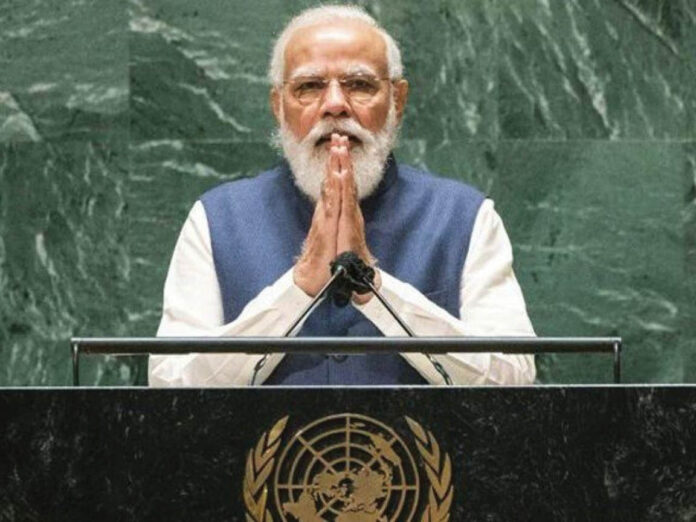 Despite PM Imran’s desire for peace
Pakistan nurtures terrorists in hope that they will only harm their neighbours, alleges India’s first secretary at UN
new york
Despite Pakistan’s desire for peace as expressed by Prime Minister Imran Khan during his address at the United Nations General Assembly (UNGA), India continued its anti-Pakistan rhetoric both in Washington and at the United Nations.
Prime Minister Narendra Modi raised “concerns” about Pakistan during talks with US President Joe Biden as well as a broader four-way summit with the leaders of Australia and Japan, according to Indian officials.
“There was a clear sense that a more careful look and a more careful examination and monitoring of Pakistan’s role in Afghanistan – Pakistan’s role on the issue of terrorism – had to be kept,” Foreign Secretary Harsh Vardhan Shringla claimed to reporters after the White House talks.
PM Imran, addressing the UN General Assembly, said that Pakistan desired peace with its nuclear-armed neighbour but the onus was on New Delhi to create conducive environment for a meaningful engagement with Pakistan.
“The onus remains on India to create conducive environment for a meaningful engagement with Pakistan” by reversing its unilateral measures of August 5, 2019; stopping its oppression and rights violations against the Kashmiris and reversing demographic changes in the occupied territory, he said.
He said that the Taliban have promised to respect human rights and build an inclusive government since taking over last month, despite global disappointment in a caretaker cabinet.
“If the world community incentivises them, and encourages them to walk this talk, it will be a win-win situation for everyone,” the premier said.
“We must strengthen and stabilise the current government, for the sake of the people of Afghanistan.”
The prime minister told the 193-member UNGA that Pakistan was being blamed by some politicians in the United States and Europe for the current turn of events in Afghanistan despite the fact the country suffered the most by joining the war against terrorism after September 11, 2001 attacks in the US.
Imran said that the world must understand why the Taliban came back into power and why a 300,000 well-equipped Afghan army … gave up without a fight. “Unfortunately, in trying to force a military solution is where the US went wrong,” he added.
“There is a lot of worry in the US about taking care of the interpreters and everyone who helped the US. What about us?” PM Imran said in a speech, pre-recorded by video due to Covid-19 precautions.
“At least there should have been a word of appreciation. But rather than appreciation, imagine how we feel when we are blamed for the turn of events in Afghanistan.”
“The hate-filled Hindutva ideology, propagated by the fascist RSS-BJP regime, has unleashed a reign of fear and violence against India’s 200 million-strong Muslim community,” PM Imran said.
The premier was referring to Modi’s Bharatiya Janata Party and the affiliated Rashtriya Swayamsevak Sangh, a century-old Hindu revivalist movement with a paramilitary component.
Under Modi, India has rescinded the statehood of Indian Occupied Jammu and Kashmir (IIOJK), its only Muslim-majority region, pushed through a citizenship law that critics call discriminatory and witnessed repeated flare-ups of religious violence.
Sneha Dubey, a first secretary at India’s UN mission, accused Pakistan of “sheltering and glorifying” al Qaeda mastermind Osama bin Laden – who was killed by US special forces in 2011 – in Abbottabad.
“We keep hearing that Pakistan is a victim of terrorism. This is the country which is an arsonist disguising itself as a firefighter,” she said.
“Pakistan nurtures terrorists in their backyard in the hope that they will only harm their neighbours.”
She highlighted violence against minorities in Pakistan. “Unlike Pakistan, India is a pluralistic democracy with a substantial population of minorities who have gone on to hold highest offices in the country,” Dubey said.
Her reply triggered yet another response as a Pakistani diplomat, Saima Saleem, took issue with Dubey’s contention that Occupied Kashmir was an internal issue for India.