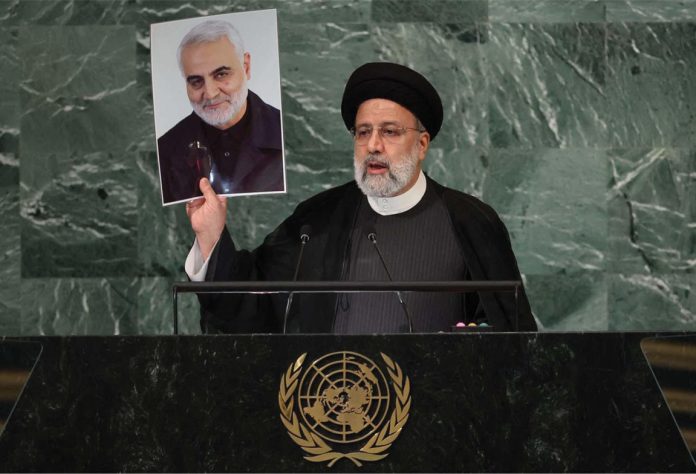 US and Iran clash on security and human rights | Tehran wants former US President Donald Trump to face trial
UNITED NATIONS
The United States and Iran clashed on security and human rights on Wednesday, with Iran’s president demanding US guarantees to revive the 2015 Iran nuclear deal and the US president vowing Tehran would never get an atomic bomb.
Iranian President Ebrahim Raisi struck a defiant tone at the United Nations General Assembly by decrying “double standards” on human rights after the death of an Iranian woman in police custody that has sparked protests around Iran.
Raisi also said Tehran wanted former US President Donald Trump to face trial for the 2020 killing of Iran’s top Quds Force commander Qassem Soleimani in a US drone attack in Iraq, holding up a picture of the general.
“There is a great and serious will to resolve all issues to revive the (2015 nuclear) deal,” Raisi told the UN General Assembly. “We only wish one thing: observance of commitments.”
Speaking later, US President Joe Biden reiterated his willingness to revive the nuclear pact under which Iran had agreed to restrain its atomic program in return for relief from economic sanctions.
In 2018, Trump withdrew the United States from the nuclear deal and unilaterally reimposed sanctions that have hobbled Iran’s economy.
A year later, Tehran reacted by gradually violating the deal’s nuclear limits and reviving US, Israeli and Gulf Arab fears that Iran may be seeking to obtain an atomic weapon, an ambition Iran denies.
“We have before us the experience of America’s withdrawal from the (deal),” Raisi said. “With that experience and this perspective, can we ignore the important issue of guarantees for a durable agreement?”
Raisi did not mention Iran’s demand that investigations by the International Atomic Energy Agency (IAEA) into traces of uranium found at three undeclared Iranian sites be closed, a major stumbling block to reviving the deal.
US and European officials have said the probes can only be closed if Iran provides satisfactory answers to the UN nuclear watchdog whose chief, Rafael Grossi, said these issues cannot be wished away.
‘Double standards’
Raisi also sought to deflect criticism of last week’s death of 22-year-old Mahsa Amini, who was arrested by morality police in Tehran for “unsuitable attire”. Amini’s death has unleashed anger in the streets since Friday over issues including freedoms in the Islamic Republic and an economy reeling from sanctions.
At least seven people have been killed in protests with some demanding “regime change”.
“The Islamic Republic considers the double standards of some governments in the field of human rights as the most important factor in the institutionalisation of human rights violations,” Raisi said in a text of his speech released by his office.
He said this led to “diverse and numerous positions towards an incident under investigation in … Iran,” an apparent reference to Amini’s case, and “the deathly silence” about allegations of human rights violations in the West.
“Human rights belongs to all, but unfortunately it is trampled upon by many governments,” he added, referring to the discovery of unmarked graves of indigenous people in Canada, the suffering of the Palestinians and images of migrant children held in cages in the United States.
Biden expressed a willingness to return to the nuclear deal, formally known as the Joint Comprehensive Plan of Action, and made clear US sympathies lay with the protesters in Iran.
“While the United States is prepared for a mutual return to the Joint Comprehensive Plan of Action if Iran steps up to its obligations, the United States is clear: We will not allow Iran to acquire a nuclear weapon,” he said, repeating a long-held US position.
“We stand with the brave citizens and the brave women of Iran who right now are demonstrating to secure their basic rights,” Biden added.