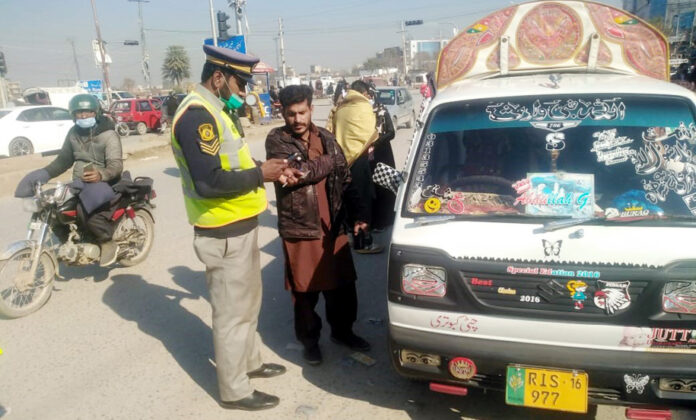 ISLAMABAD
Islamabad Traffic Police (ITP) issued 50,931 fine tickets to road users over four major violations during the last one month , a police spokesman said.
He said that ITP has launched ‘Special Campaign’ last month in order to ensure safe road environment and traffic discipline in the city. The campaign has been formally launched following directions of the Inspector General of Police (IGP) Islamabad Muhammad Ahsan Younis.
He said that action was taken against 9927 road users over lane violation, 6369 motorists for not fastening seat belt during drive, 2749 motorists for using mobile during drive, 28,386 motorcyclists for not using helmets.
He said that special campaign is underway to check violations while various teams headed by Senior Superintendent of Police (Traffic) Mazhar Iqbal are performing duties at main roads of the city and taking action against the violators.
SSP Traffic Muhammad Mazhar Iqbal has said that strict action would be taken during campaign against those involved in lane violation, not fastening seat belt, using mobile phone during driving and not wearing helmets during bike ride. He said that the purpose of this campaign is to ensure better traffic discipline through cooperation of citizens and create traffic sense among them.
ITP is striving hard for safety of its citizens and to overcome the traffic accidents by ensuring safe road environment in the city, he added
Mr. Mazhar Iqbal said that ITP personnel have been directed to ensure implementation on traffic rules and regulation irrespective of status and rank and demonstrate patience and politeness while issuing traffic violation tickets to the road users.
He said that ITP is utilizing all available resources to facilitate the general public. The force issues traffic violation tickets not as a punitive measure but the purpose is to ensure safe road environment in the Capital and secure the lives of the people, the SSP (Traffic) added.