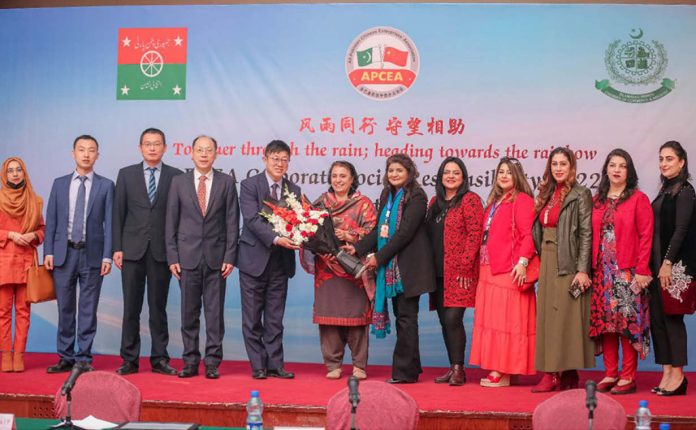 Islamabad
All-Pakistan Chinese Enterprises Association (APCEA) has donated 400 tents to the people of flood-hit sites across Pakistan. In this connection, a ceremony was held at the Chinese Embassy which was attended by businessmen, social activists, and diplomats.
During the occasion, Vice Chairman APCEA, Mr. Sun Youcheng remarked Pakistan-China friendship has always stood the test of time, in the face of all disasters.
He also shared the APCEA contribution of Rs15.5 million to the Prime Minister’s Flood Relief Fund 2022 in August and since then it had launched various rounds of donations.
He also expressed his gratitude to IWCCI and JWP for their valuable assistance in this regard.
President IWCCI, Ms. Rizwana Asif expressed her heartiest gratitude to the government of China and the business community for their consistent support in these testing times.
She especially thanked APCEA for its generous donation of 200 tents.
Chief Coordinator Jamhoori Wattan Party Balochistan and Chairman Municipal Committee Dera Bugti, Mr. Mir Chakkar Bugti thanked APCEA for its donation of 200 tents that have provided shelter to 200 families which are facing the impact of the flood.
These families have no roof over their heads and are struggling even more so due to winters. Earlier today, JWP held a ceremony in Dera Bugti, Balochistan, acknowledging APCEA’s donation and celebrating the Pakistan-China friendship with the local communities.
Minister Counsellor, Mr. Xie Guoxiang lauded APCEA as the representative of the Chinese Business community in Pakistan and its efforts in leading social and economic contributions.
He acknowledged APCEA’s donation of 400 tents to IWCCI and JWP. He also remarked that China has been on top in the list of countries that have helped Pakistan in the flood crisis with donations exceeding 644.1 million RMB.
Naima Ansari, Former President of IWCCI also requested China to play a proactive role in Pakistan’s economic recovery and reiterated Pakistan’s strong desire to deepen cooperation with China in areas of green development, climate resilience, and disaster management.