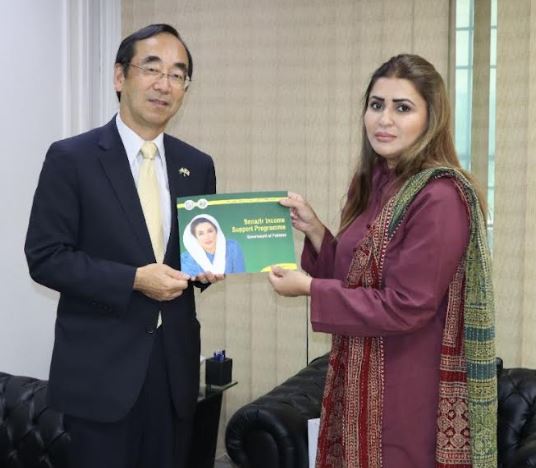 Federal Minister, Shazia Marri said that Pakistan and Japan have cordial and cooperative relations for the last several decades. We hope this relationship will continue to remain solid notwithstanding the regional and international developments and our respective relations with other countries, she added.

Pakistan attaches great importance to its relationship with Japan. We greatly value the important contributions made by Japan in supporting Pakistan’s development efforts over the years, Shazia Marri said.

Federal Minister said that Japanese investment in Pakistan brings good will for the people of Pakistan and its strengthens our relationship. Pakistan is trying to stabilize the economy to attract FDI.

In spite of social and economic difficulties, people of Pakistan are kind to us, said the Japanese Ambassador to Pakistan.

Pointing towards the flood situation in Pakistan, Shazia Marri said that there are thousands of pregnant women in the flood affected areas who need the world’s attention. We are still in rescue stage but when the water will recede then we need a lot of resources for rehabilitation. We have never seen such a huge devastation, she added.

Traditional and social media of Pakistan tried its best to get world’s attention at this critical juncture, said the Japanese Ambassador.

Year 2022 is being marked as “70th anniversary of the establishment of diplomatic relations” between the two countries. The volume of our bilateral trade is much below our potential. I have noted that Japanese investments in Pakistan have declined in recent years. Hope you would make an effort to enhance Japanese FDI to Pakistan. We need to further enhance our trade and economic ties with a view to achieving a win-win situation, she said.

Federal Minister said that Pakistan is committed to enhance its bilateral engagement and dialogue with Japan. We hope to take this relationship to a new and higher level of cooperation, with particular focus on economic & business ties, and human resource development initiatives.