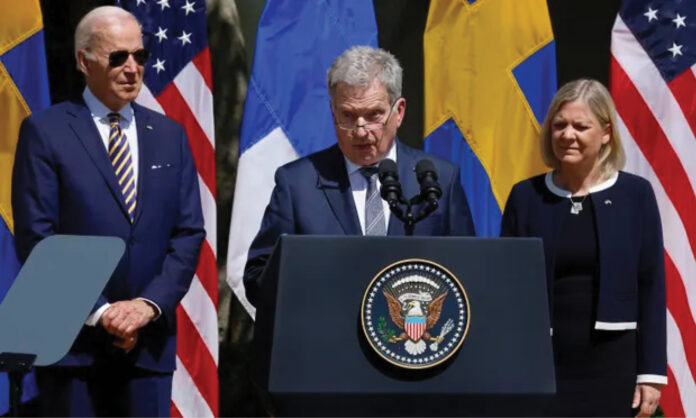 The countries’ leaders meet the US president at the White House as they seek a resolution with Turkey
Washington
The US president, Joe Biden, has welcomed the Finnish and Swedish leaders to the White House promising full support for their membership applications to what he called a “revived Nato” in the wake of the Ukraine invasion.
In their remarks in the Rose Garden, the Finnish president, Sauli Niinistö, and the Swedish prime minister, Magdalena Andersson, addressed the only major barrier to their countries’ accession to the alliance: the objections of the Turkish leader, Recep Tayyip Erdoğan, who restated on Thursday his resolve to veto their membership.
“We will continue our policy in a determined way. We have told allies that we will say no to Finland and Sweden’s Nato membership,” Erdoğan told Turkish students in a video uploaded on his official Twitter account. All 30 alliance members have to approve the acceptance of a new ally.
Erdoğan accused Sweden and Finland of harbouring and financing the Kurdistan Workers party militant group and Syrian Kurdish YPG, who he deems to be “terrorists”.
In his Rose Garden comments, Niinistö addressed those accusations directly.
“Finland has always had proud and good bilateral relations with Turkey. As Nato allies, we will commit to Turkey’s security, just as Turkey will commit to our security,” the Finnish president said. “We take terrorism seriously. We condemn terrorism in all its forms and we are actively engaged in combating it. We are open to discussing all the concerns Turkey may have concerning our membership in an open and constructive manner. These discussions have already taken place and they will continue in the next days.”
He emphasised the contribution that Finland would make to the alliance.
“Finland’s armed forces are one of the strongest in Europe,” Niinistö said. “We have also consistently invested in developing capabilities. The Finns’ willingness to defend the country is one of the highest in the whole world.”
In her speech, Andersson said that the Swedish government was “right now having a dialogue with all Nato member countries, including Turkey, on different levels to sort out any issues at hand”.
She underlined the historic shift that Vladimir Putin’s invasion of Ukraine had brought about.
“After 200 years of military non-alignment, Sweden has chosen a new path,” the Swedish prime minister said. “Russia’s full scale aggression against a sovereign and democratic neighbour was a watershed moment for Sweden. And my government has come to the conclusion that the security of the Swedish people will be best protected within the Nato alliance. And this is backed by very broad support in the Swedish parliament.”
Biden did not refer to Turkish opposition in his upbeat speech outside the White House, but noted that both candidate Nato members “meet every Nato requirement and then some”.
“Having two new Nato members in the high north will enhance the security of our alliances and deepen our security cooperation across the board,” the US president said. “Today there is no question Nato is relevant, that it’s effective and that it’s more needed now than ever.”
After the Rose Garden remarks, the US national security adviser, Jake Sullivan, told reporters: “When the president met … the president of Finland and the prime minister of Sweden, he indicated that they’re both intending to speak directly to President Erdoğan and their teams are going to engage directly with senior Turkish officials.”
“We’re there to support that effort in any way but we think they can work through this and ultimately Finland and Sweden will be admitted as members,” Sullivan added.