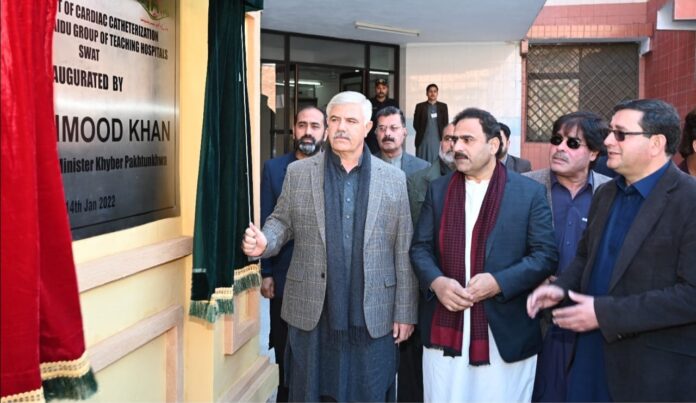 Swat : Chief Minister Khyber Pakhtunkhwa Mahmood Khan on Friday paid a day long visit to District Swat where he inaugurated different development projects including Hostel, Lecture Theatres, laboratories, Auditorium and other facilities in Saidu Medical College which have been completed at a cost of Rs. 1.1 billion. He also inaugurated newly established Cath lab and Regional Blood Centre at Saidu Teaching Hospital which have been completed at cumulative cost of Rs. 410 million. The chief minister, on the occasion performed ground breaking of hospital block, college block and boundary wall of Saidu College of Dentistry which would be completed at an estimated cost of Rs. 710 million. Addressing the ceremony held at Saidu Medical College to this connection, the chief minister said that establishment of Dental College in Swat was undoubtedly a historic step as it was the long standing demand of the people of Malakand which has been fulfilled today. He said that the people of whole Malakand division would benefit from this college. He said that incumbent government had increased seats in medical colleges from 1300 to 1750. While terming extension of Sehat Card Plus to cent percent population of the province as a flagship project of PTI government, Mahmood Khan said Sehat Card Plus scheme was being made more comprehensive as free treatment of kidney diseases had been included in the scheme whereas liver transplantation, treatment of cancer and free OPD services would also be included soon. Highlighting the development strategy of his government, the chief minister said that previous chief ministers concentrated only on their respective districts whereas his government was working for the uniform development of whole province including Newly Merged Tribal areas. 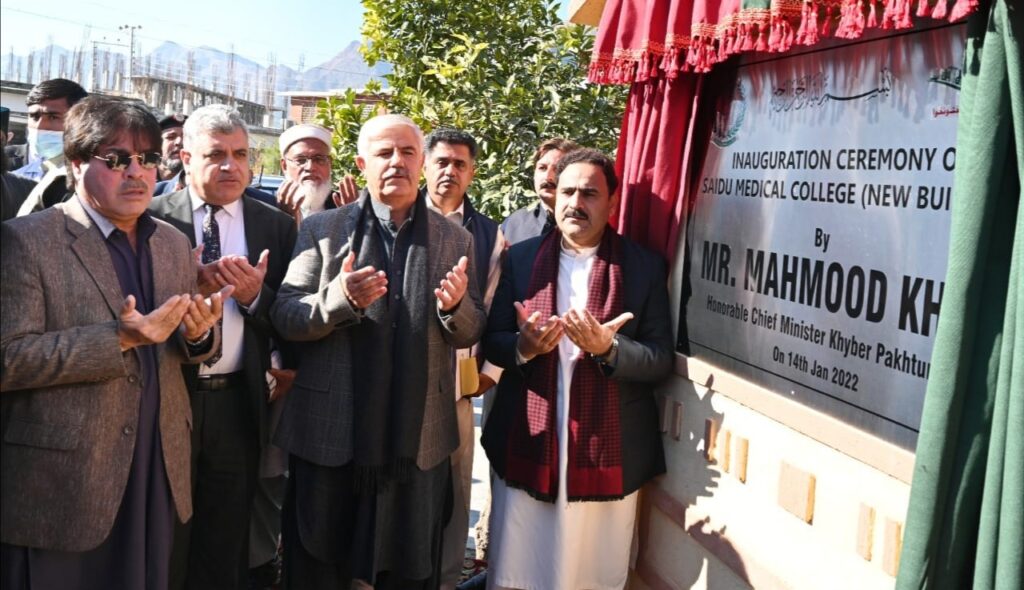 The chief minister said that Medical Colleges would also be established in Charsadda, Buner, Kurram, Dir, Mansehra and other districts of the province in order to provide opportunities of Medical Education to people in their own districts. He said that commitments made to the people were being fulfilled one by one adding that tourist activities were in full swing in the province due to policies of incumbent government for promoting tourism industry in the province. He said around 2.7 million domestic and foreign tourists turned to the tourist sites of Khyber Pakhtunkhwa in the last season which has exhibited the successful policies of provincial government to this effect adding that the provincial government has earned Rs. 66 billion in the season. The chief minister said that work was in progress under long term strategy to resolve the issues of militancy-hit district Swat which on completion would provide all time solution to the issues being faced by the people of Swat. He said that ground breaking of Swat Motorway Phase-II would also be performed next month adding that a project has been approved to resolve the long standing issue of clean drinking water for Mingora city. He further stated that loans upto 0.5 million were being provided to youth for self-employment. Similarly, he added that payment of monthly stipend to Aaima Karam has been started.
Provincial Minister Mohibullah Khan, Members Provincial Assembly Fazal Haikm Khan, Azizullah Garan, Mian Sharafat and others were also present on the occasion. Earlier addressing the ceremony Chief Executive Saidu Group of Hospital Dr. Israr ul Haq and Project Director Saidu Dental College Dr. Muhammad Tariq highlighted the performance and future course of action of the institution.