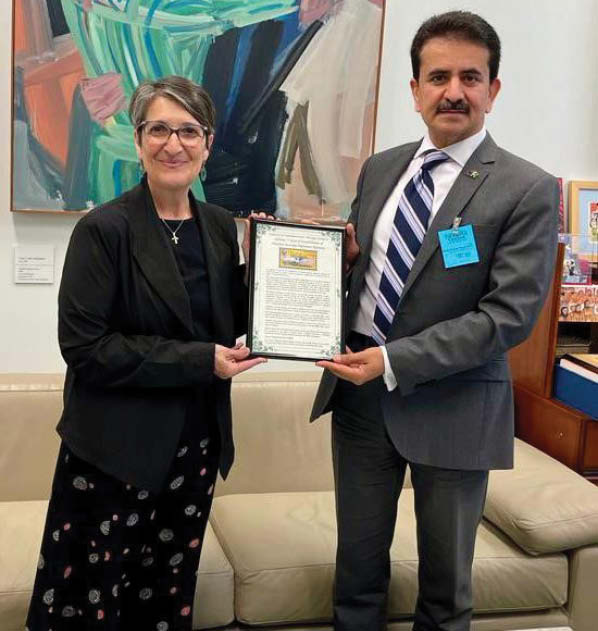 CANBERRA (Australia)
The largest-ever Australia-Pakistan Parliamentary Friendship Group with 38 members has been established at the 47th Parliament of Australia.
The group comprises members from both the Houses of the Australian Parliament – the Senate and the House of Representatives with representation from all the Australian States.
The Parliamentary Friendship Group is chaired by Maria Vamvakinou MP from the ruling Australian Labor Party (ALP), while Rowan Ramsey MP from the opposition Liberal Party is the vice chair.
The other members of the group include Deputy Prime Minister and Defence Minister Richard Marles MP, President of the Senate Senator Susan Lines, Speaker of the House of Representatives Dugald Milton Dick, MP; former Foreign Minister Senator Marise Payne and former Defence Minister Senator Linda Reynolds.
High Commissioner to Australia Zahid Hafeez Chaudhri in a statement said the establishment of Pakistan-Australia Parliamentary Friendship Groups highlights the significance of friendly and cooperative relations between the two countries.
He said in addition to promoting parliamentary cooperation, these groups will also help further strengthen bilateral relations and expand cooperation in multiple areas.
Pakistan and Australia have maintained friendly and cooperative relations since the establishment of diplomatic ties between the two countries soon after Pakistan gained independence in 1947. The bilateral cooperation over the past 75 years has extended to the areas of politics; trade and investment, defence and security, science and technology, social and economic development, education, agriculture, sports, tourism, and the environment.
The two countries have established multiple institutional mechanisms to discuss ongoing cooperation and explore new avenues of future collaboration. The presence of over 100,000 strong Pakistani Diaspora in Australia acts as a strong bridge between the two countries and their peoples.
In Pakistan, both the Senate and the National Assembly have separate Pakistan-Australia Parliamentary Friendship Groups. Senator Anwaar-ul-Haq Kakar is the Convener of the Group in the Senate, while Speaker of the National Assembly Raja Pervez Ashraf, MNA is the President and Minister for Information and Broadcasting Marriyum Aurangzeb, MNA is the Convener.