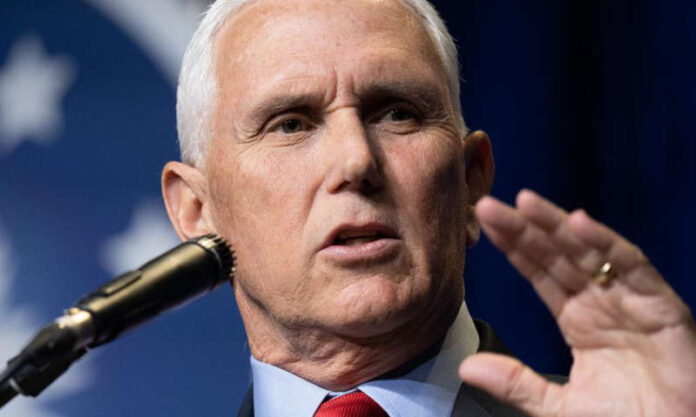 Mike Pence has said he isn’t sure that he and Donald Trump will ever see “eye to eye” over what happened on 6 January, when a mob of the president’s supporters stormed the Capitol in an effort to overturn the election.

Pence, speaking at a Republican dinner in the early voting state of New Hampshire, gave his most extensive comments to date on the deadly events, when rioters broke into the Capitol building, some chanting “Hang Mike Pence!” after the vice-president said he did not have the power to overturn Joe Biden’s victory.

“As I said that day, Jan 6 was a dark day in history of the United States Capitol. But thanks to the swift action of the Capitol police and federal law enforcement, violence was quelled. The Capitol was secured,” Pence said.

“And that same day, we reconvened the Congress and did our duty under the constitution and the laws of the United States,” Pence continued. “You know, President Trump and I have spoken many times since we left office. And I don’t know if we’ll ever see eye to eye on that day.”

It was a rare departure for Pence, who spent four years standing loyally beside his boss amid controversy, investigation and impeachment. It comes as Pence considers his own potential 2024 White House run and as Republicans, some of whom were angry at Trump in the days after the insurrection, have largely coalesced back around the former president.

Pence praised Trump several times during his nearly 35-minute speech at the Hillsborough county Republican committee’s annual Lincoln-Reagan awards dinner in Manchester. He also tried to turn the events of 6 January back around on Democrats, saying they wanted to keep the insurrection in the news to divert attention from Biden’s progressive agenda.

Pence also hit upon several favorite themes of conservative Republicans, including pushing back against “critical race theory”, echoing a wider push on the right to limit how history and race are covered in America’s schools.

His speech came as Georgia’s education board adopted a resolution insisting that students should be taught that racism and slavery are aberrations rather than the systemic norm.

“America is not a racist country,” Pence said, prompting one of several standing ovations and cheers during his speech.

“It is past time for America to discard the left-wing myth of systemic racism,” Pence said. “I commend state legislators and governors across the country for banning critical race theory from our schools.”

His choice of states, including an April appearance in South Carolina, is aimed at increasing his visibility as he considers whether to run for the White House in 2024. His team said he plans more trips, including stops in Texas, California and Michigan.