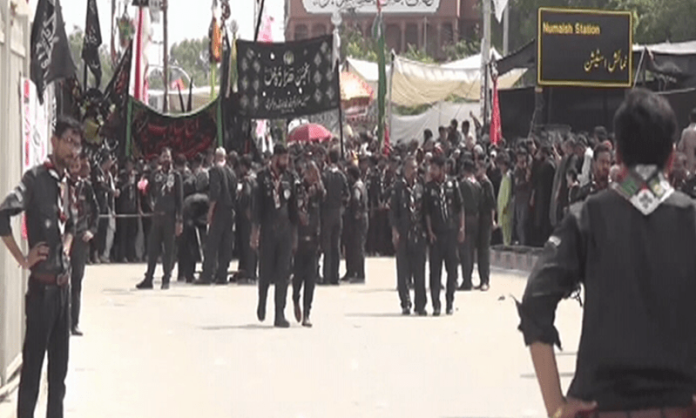 Mourners are taking out processions across the country today (Tuesday) to observe Yaum-i-Ashura amid tight security arrangements and with cellular services suspended in several areas.

Yaum-i-Ashura is observed every year on Muharram 10 with solemnity to pay homage to Imam Hussain and other martyrs of Karbala.

Karachi
The main procession in Karachi, which was taken out from Nishtar Park at 9:00am, will culminate at Hussainian Iranian Imambargah along MA Jinnah Road, according to a press release issued by traffic police.

Meanwhile, traffic from this route would be diverted towards Jubilee Market, Nishtar Road and other areas, the traffic police press release said.

In Karachi and other major cities of Sindh, more than 55,000 police and Rangers personnel have been deployed for the security of mourning processions and mobile phone and internet services are to remain suspended under a comprehensive security plan for Ashura.

Earlier, South DIG Sharjil Kharal told Dawn the Pakistan Army would be on standby in case of any emergency in the city.

The Sindh government last week imposed a ban on pillion riding and the use of helicams or drones for video recording by media channels during processions and majalis from Muharram 8 (Aug 7) to 10 (Aug 9).

Altogether, 12 processions are to be taken out in the city, the Dawn.com correspondent in Peshawar said.

Tight security arrangements have been made for Ashura in the city, with around 11,000 police personnel deployed to guard mourning processions, same as on Muharram 9, he said.

Quetta
The main procession in Quetta commenced at Imambargah Hussainiya Syedabad on Alamdar Road, and will pass through Toghi Road, Liaquat Bazaar and Prince Road to return to Alamdar Road, where it will culminate around 8pm, according to a statement issued by the Balochistan Shia Conference.

During the course, Shia scholars would deliver speeches at Bacha Khan Chowk, where Zuhr prayers would be offered, the statement said.

The DIG said CCTV cameras would be employed for air surveillance, adding commercial centres along the procession’s routes were sealed and road had been blocked for traffic.

Mobile phone services in the city would remain suspended from 6am to 8pm, he said, adding that three battalions of the Pakistan Army were on standby.

Earlier, a Dawn report quoted him as saying that 24 imambargahs had been declared highly sensitive in the city while 23 sensitive.

Majalis were being held in 57 imambargahs while women’s majalis were going on in 20 takiya khanas, he said, adding that 21 permanent gates and 49 gates had been set up for meetings across Quetta and patrolling of security forces increased in and around the city.

PM’s message
In his message on Ashura, Prime Minister Shehbaz Sharif said Imam Hussain’s message of “resistance and defiance will continue to inspire humanity to aspire for a moralistic world order that is based on universal principles of equality and freedom”.

He said the “supreme sacrifice rendered by Hazrat Imam Hussain (RA) and his family drew a distinct line between the forces of truth and falsehood, and the oppressor and the oppressed.

“The great Imam established a moral principle that has animated the struggles for the right to self-determination”.

The PM stressed the need for seeking guidance from the “exemplary character” of Imam Hussain and his companions as “humanity navigates multiple challenges and seeks to break the logjam it finds itself in”.