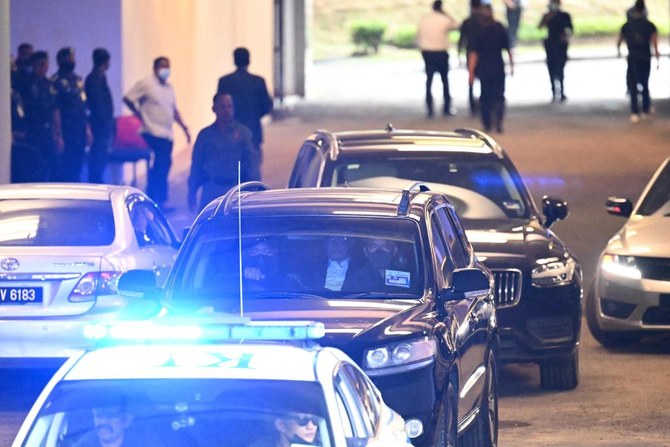 KUALA LUMPUR
Former Malaysian Prime Minister Najib Razak’s new prison lodgings may be less than an hour’s drive from his mansion in Kuala Lumpur’s affluent Bukit Tunku neighborhood, but it is a world away from the luxury he is used to.
Najib lost his final appeal on a 12-year jail sentence for corruption on Tuesday, and was taken under heavy security to the country’s largest jailhouse in Kajang — a sprawling complex southeast of the capital that holds up to 5,000 prisoners and includes a women’s facility .
First convicted in July 2020, Najib had been out on bail pending appeals. The country’s top court upheld his guilty verdict over criminal breach of trust, abuse of power, and money laundering charges for illegally receiving about $10 million from a former unit of state fund 1Malaysia Development Berhad (1MDB).
The son of Malaysia’s second prime minister, Najib held the premiership from 2009 to 2018, when public anger over the multi-billion dollar graft scandal at 1MDB brought election defeat.
Having been golf buddies with US presidents Barack Obama and Donald Trump and other world leaders, the British-educated son of Malay nobility will now count murderers and drug traffickers among his fellow inmates in Kajang.
One of them, Azilah Hadri, was a member of Najib’s security detail before he was convicted of murder for the 2006 killing of Mongolian model Altantuya Shaariibuu.
Azilah is currently on death row, while a fellow policeman who was convicted along with him sought sanctuary in Australia, where he remains.
In a 2019 court filing seeking to set aside his conviction, Azilah accused Najib of ordering the murder, a claim the ex-premier denied. The Federal Court rejected Azilah’s application in 2020.
The Prisons Department did not respond to an emailed request for comment on what conditions Najib will face in jail. On Facebook, it denied as fake news a post by another user saying that the prisons provided special privileges for “VIP inmates” such as televisions and air-conditioning.
Otherwise, rights groups say Malaysian prisons suffer from overcrowding, poor hygiene, and lack of medical facilities, with infectious diseases such as tuberculosis and scabies common.
Opposition leader Anwar Ibrahim, who spent a total of eight years incarcerated at another Malaysian prison, has said he experienced inhumane and degrading conditions, including being served rotten fish “all the time,” according to media reports.
However, Najib’s former deputy prime minister, Ahmad Zahid Hamidi, told parliament in 2016 that Anwar obtained privileges based on medical advice, including a customized hospital bed, a desk, hot showers, and a special diet.
Anwar was also given access to the prison library, received regular visitors, and was allowed to leave for hospital treatments and to attend trial, according to Ahmad Zahid.
Anwar was jailed twice on corruption and sodomy charges, which he maintains were politically motivated. He was pardoned by the king and released days after Najib’s election defeat in 2018.
The only times that Najib is likely to leave Kajang, are when he is escorted to court to attend hearings in four other cases related to corruption at 1MDB and other government agencies.
US and Malaysian authorities say over $4.5 billion was stolen.
Malaysian investigators say they traced more than $1 billion to Najib’s bank accounts, but he has steadfastly denied any wrongdoing and pleaded not guilty to all charges.
The opulent lifestyle of Najib and his family came to light with the discovery of about $275 million worth of cash, jewelry, and other luxury goods in residences used by Najib and his family.
Najib’s wife, Rosmah Mansor, has pleaded not guilty in a corruption case unrelated to 1MDB. The court is set to deliver its verdict in her trial on Sept. 1.