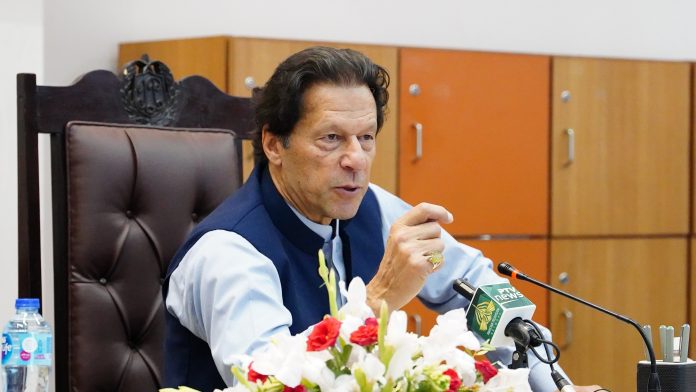 Imran Khan addressed a public meeting in Buner, Khyber Pakhtunkhwa in Buner on Friday and appealed to the Supreme Court (SC) that it should include representatives of civil society in the committee.

He told the SC that he never violated the law of any country including Pakistan and is also not in favour of provoking people to be violent against law enforcement personnel like policemen or Rangers as they are also Pakistanis.

Addressing the charged gathering, Imran Khan warned the coalition government of Prime Minister Shehbaz Sharif against filing any treason case on him on the grounds of his ‘Azadi March’.

“They [opponents] are talking about the treason trial against Imran Khan. They want to get rid of me through a treason case. Will Asif Ali Zardari and Nawaz Sharif file a treason case against me – the people who are owning assets abroad? I will never surrender before any superpower like this imported government.”

Imran Khan strongly criticized self-exiled former premier Nawaz Sharif and former President Asif Ali Zardari. He said the Sharifs and other ruling families have assets in foreign countries so they couldn’t be sincere with Pakistan, the Pakistani people and institutes.

PTI Chairman Imran termed the recent increase in prices of petroleum products an atom bomb on the more than 80 per cent poor population of Pakistan.

Imran Khan said he wants to ask something from the ‘neutrals’ – the term the PTI chairman used to mention military establishment. The PTI chairman criticised that being apolitical is a good thing but national security is also important. “I had warned them about a major economic dent if the conspiracy succeeds against my government.”

“I have always given the examples of the Soviet Union and the United States (US) having the strongest military powers. The Soviet Union had fallen just after the economic collapse.”