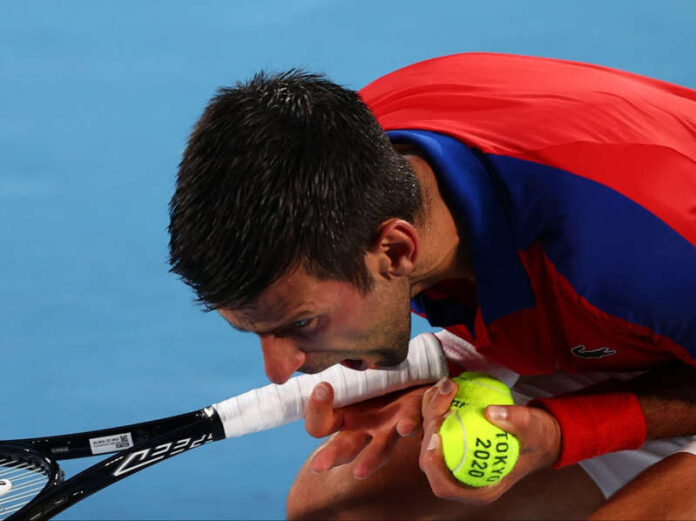 Tokyo Olympics 2020
World No1 Novak Djokovic has been beaten by Alexander Zverev in the semi-finals of the men’s singles tennis event at the Tokyo Olympics.

Djokovic, representing Serbia, was looking to add to his singles bronze medal from Beijing 2008 and move a step closer to the ‘Golden Slam’ – achieved by winning all four Grand Slams and an Olympic gold medal in one calendar year.

The 34-year-old won the first three majors of the year by triumphing at the Australian Open, French Open and Wimbledon, with the US Open set to begin on 30 August.

But Germany’s Zverev fought from a set down to beat Djokovic in three frames on Friday, denying the Serb an elusive Olympic gold medal with a 1-6 6-3 6-1 victory.

World No6 Zverev will face Karen Khachanov of the Russian Olympic Committee in the final.

Djokovic, meanwhile, will take on Pablo Carreno Busta in the bronze-medal match, after the Spaniard was beaten 6-3 6-3 by Khachanov in the semi-finals.

Djokovic’s Wimbledon title earlier this month was his sixth at the grass-court major and 20th Slam trophy overall. That victory saw him tie Roger Federer and Rafael Nadal’s joint-record of 20 major men’s trophies.

While Djokovic’s chances of following his rivals in winning Olympic gold might have disappeared, the 34-year-old still has the opportunity to do what neither the Spaniard nor Swiss has ever managed: win a calendar Slam.