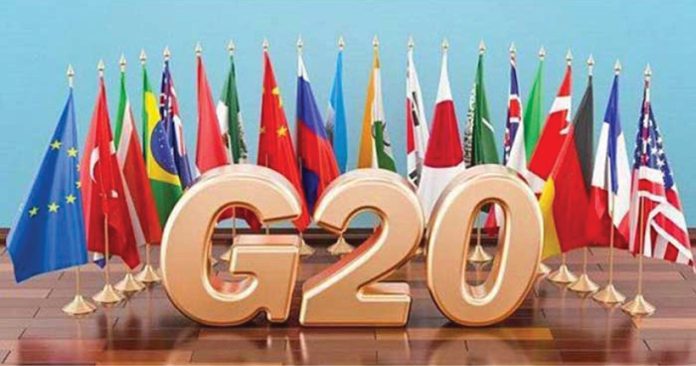 SRINAGAR
In view of objection raised by some G-20 countries as a result of diplomatic efforts by Pakistan, the venue of the G-20 summit is likely to be shifted from previously announced Indian illegally occupied Jammu and Kashmir to New Delhi in India.
Though the Modi government has not yet confirmed the development, reports in the Indian media suggest the key infrastructure is being built in Delhi’s Pragati Maidan. The announcement by the Modi government to host the event in disputed Jammu and Kashmir triggered diplomatic tensions as some important G-20 countries including China not supported the idea.
“India is expected to host the G-20 summit in Delhi, while a number of states have been asked to suggest venues for about 100 “preparatory” meetings expected to be held between December 2022 and November 2023 during India’s G-20 presidency,” Chennai based newspaper, The Hindu quoted officials saying.
“Construction for conference halls, and new hotels to house the 20 heads of state and thousands of officials and delegates is already underway, while Prime Minister Narendra Modi inaugurated a nearly Rs 1,000-crore Integrated Transit Corridor Project this month to connect the Pragati Maidan headquarters to other key locations.”
Within a day after the announcement was made, Islamabad sharply reacted and announced it will approach the G-20 members to reject the venue. Soon, China too opposed the holding of G-20 meeting in disputed Jammu and Kashmir.
The Hindu reported that the “confusion emerged” after the letter issued by Jammu and Kashmir Principal Secretary Manoj Kumar Dwivedi appeared in the media, dated June 23 sanctioning the constitution of a 5-member committee for the “overall coordination of G-20 meetings” in Jammu and Kashmir. It was followed by Lt Governor Manoj Sinha announcing it to be a “matter of privilege” to host the G-20 summit.