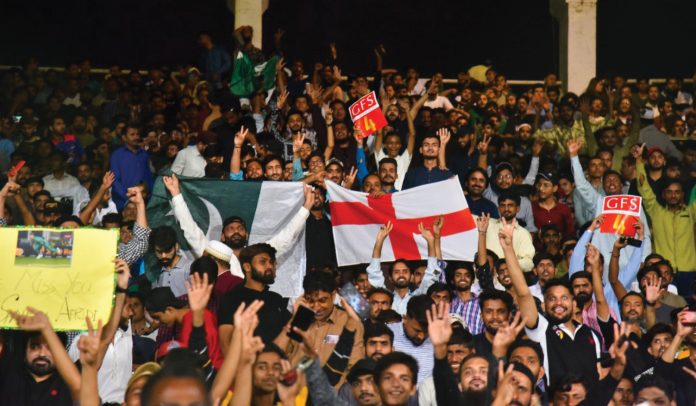 Mickey Arthur wants Asif Ali’s promotion in batting order
LAHORE
Pakistan and England will go head-to-head today (Wednesday) in the fifth Twenty20 International match of the seven match series as the second leg of series begins at Qaddafi Stadium.
The series is leveled at 2-2, as Pakistan had defeated visitors in a nail-biting finish during fourth T20I at National Stadium Karachi.
Pakistan are expected to test their ‘full-strength’ squad in Lahore-leg, local media reported, while no major changes are expected in the English playing XI.
Media reported that inclusion of vice captain Shadab Khan as well as fast bowler Naseem Shah in Pakistan’s playing eleven is on the cards, while back-up wicket keeper Muhammad Haris can also be given a chance during one of the final matches.
On Monday, the two teams were reached Lahore amidst extraordinary security, where they were moved to hotel from the airport.
“It has been decided that Pakistan should go all out and with the best available combination for the rest of three matches against England,” The News had quoted a Pakistan Cricket Board (PCB) official as saying on Tuesday.
“Both Naseem and Shadab are an important part of that best combination. Though Naseem played one match in Karachi, a fitter and ready Naseem will be there for the fifth match. Shadab missed all the four matches of the series against England in Karachi after developing an injury during the Asia Cup final against Sri Lanka on September 11,” the official said.
Meanwhil, former Pakistan Head Coach Mickey Arthur has urged Pakistan team’s management to promote hard hitting batsman Asif Ali to the top of batting order.
Asif Ali’s gigantic sixes two sixes on final three balls during the fourth T20I against England merely created the difference between the two teams, and Pakistan clinched victory at the end by just 3 runs. As the match concluded, there was a heated debate over Asif Ali’s batting number in the lineup as many wanted him to face more deliveries, and Mickey Arthur was no exception.
“Some great death bowling from Haris Rauf but Asif Ali the difference, he has to face more balls!,” wrote Arthur on Twitter.
Asif Ali had performed brilliantly at the previous men’s T20I World Cup in United Arab Emirates (UAE) where he had finished the games single handedly.