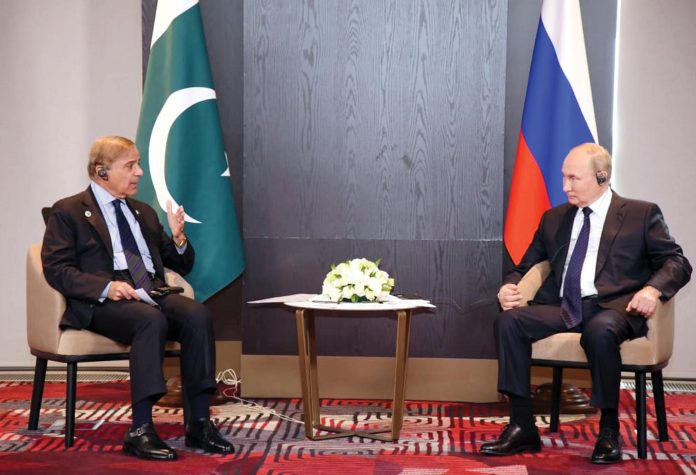 PM Shehbaz, Tajik president discuss bilateral, regional matters
SAMARKAND
Prime Minister Shehbaz Sharif held a meeting with Russian President Vladimir Putin in Samarkand on Thursday. During the meeting, they discussed bilateral relations and ways to further strengthen cooperation.
Russian President Vladimir Putin said that pipeline for gas supplies to Pakistan are possible, and that part of the necessary infrastructure is already in place, Russian state-owned new agency RIA reported.
The high-level meeting came after the prime minister reached the Uzbekistan capital to attend the annual meeting of the SCO’s Council of Heads of State (CHS) during a two-day visit — from September 15 to 16.
Putin, his Chinese, Turkish and Iranian counterparts, the prime ministers of Pakistani and India and other leaders have gathered at Samarkand to attend the annual meeting of the heads of state of the Shanghai Cooperation Organization (SCO).
Photos released by Pakistan Prime Minister’s Office showed Putin warmly welcoming Shehbaz Sharif with a broad smile on his face. The two leaders reportedly discussed bilateral relations and the regional situations.
It is Shehbaz Sharif’s first meeting with Putin since he replaced Imran Khan, who had met the Russian president in February a day before Moscow invaded Ukraine.
After the meeting with Putin, the prime minister held a bilateral meeting with Tajikistan’s President Emomali Rahmon. The two leaders held wide-ranging talks covering all aspects of mutually beneficial bilateral cooperation, including regional and international issues. Pakistan and Tajikistan have agreed to work together to strengthen peace, stability, and security in the region, particularly in Afghanistan. The two leaders exchanged views on regional and global issues of mutual interest, covering all aspects of bilateral cooperation.
Expressing satisfaction over the growing political, economic, and cultural cooperation between the two countries, Shehbaz Sharif emphasised the strategic partnership to further expand the same.
He underscored the need for boosting security, mutual trust, countering current global challenges, enhancing regional stability and increasing cooperation in the fields of road transportation and connectivity.
Reiterating Pakistan’s resolve for the timely completion of the ‘CASA-1000’ power transmission project, Prime Minister Shehbaz Sharif highlighted Pakistan’s readiness to facilitate the provision of access to Gwadar and Karachi to Tajikistan.
The Prime Minister also underlined the importance of regular meetings of bilateral institutional mechanisms for the implementation of energy projects. The two leaders focused on further strengthening the reliable and constructive high-level contacts, inter-parliamentary ties, and defence and security relations between the two countries.
They agreed to remain in close contact and invited each other to visit their respective countries. The Tajik President extended sympathies and condolences over the loss of human lives and devastation in Pakistan due to floods and assured them of Tajikistan’s full support in the relief and rehabilitation of the affected people.
The Prime Minister thanked Tajikistan for its support for the flood-affected people in Pakistan and shared details of the devastation due to floods induced by climate change. On the sidelines of the 22nd Meeting of the Council of Heads of State of the Shanghai Cooperation Organization, Prime Minister Shehbaz Sharif also met with President of Iran Ebrahim Raisi on Thursday.
The prime minister, along with a high-level delegation, arrived here on a two-day visit mainly to attend the summit, at the invitation of the President of Uzbekistan, Shavkat Mirziyoyev. Foreign Minister Bilawal Bhutto Zardari, Defence Minister Khawaja Muhammad Asif, Finance Minister Miftah Ismail and SAPM Tariq Fatemi also attended the meeting.