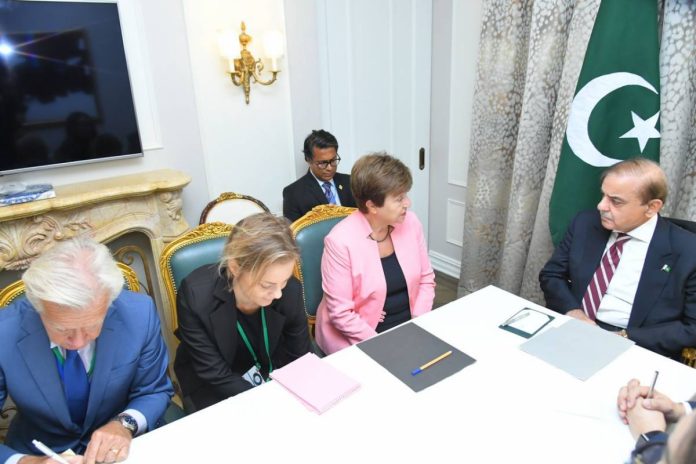 NEW YORK
Prime Minister Shehbaz Sharif on Thursday expressed gratitude towards the World Bank for providing 372 million dollars’ vast amount for flood relief in Pakistan.
The Prime Minister on Thursday met President of the World Bank David R. Malpass at the sideline of the 77th session of the United Nations General Assembly.
World Bank’s President stressed that Pakistan should be prioritized for reconstruction through the collective support of the international community, Radio Pakistan reported. He expressed sympathy and condolence over the damage and destruction caused by the flood.
He also expressed the World Bank Group’s willingness to help Pakistan in its reconstruction and rehabilitation efforts. He pledged to immediately re-disburse 850 million dollars to help Pakistan in flood relief efforts.
Prime Minister Shehbaz Sharif appreciated the World Bank’s partnership with Pakistan and informed about the government’s initiatives to introduce economic policies focused on strengthening the economy, price stability and maintaining the sustainability of financial sectors.
He also highlighted the government’s need for additional investment and financial resources from the international community to mitigate the devastating effects of climate change on the people and economy of Pakistan.
The Prime Minister emphasized that Pakistan’s role in climate change is very small, yet Pakistan is facing the devastating effects of climate change. He thanked the World Bank Group for providing 372 million dollars in flood relief.