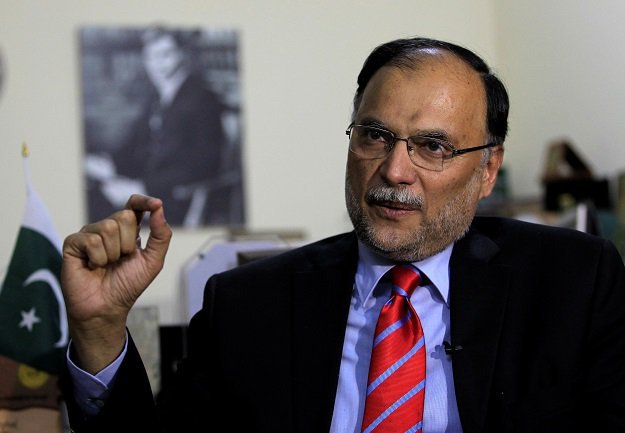 ISLAMABAD
Prime Minister Shehbaz Sharif and the military leadership will mutually decide on the next Chief of Army Staff (COAS) but for now, the extension of the COAS Qamar Javed Bajwa or the appointment of new army chief is not on the table, Federal Minister for Planning and Development Ahsan Iqbal has said.
In an exclusive interview with a private television channel Sunday, the minister also criticized the Imran Khan government for destroying China-Pakistan Economic Corridor (CPEC) projects especially the Gwadar deep-sea port, which he revealed could no longer dock larger ships after falling to neglect under the PTI government.
Ahsan Iqbal said the Imran Khan government did not spend a single dollar on Gwadar although China allocated $123 million for the cleaning of the silt.
For four years, the maritime affairs authorities kept requesting for funds to carry out maintenance dredging but in vain, he said. The depth of Gwadar port had dropped from 14 meters to 11 meters, he said.
He added that the current government has now tasked the Pakistan Navy with dredging the port, but until the operation is completed no big ship could dock at Gwadar port. Talking about the appointment of new COAS due in November, he said Imran Khan was making institutions controversial to save his politics.
For now, the extension of the COAS Qamar Javed Bajwa or an appointment of new army chief is not under consideration, he said. “This is something that the prime minister decides by working together with the military leadership in the interest of the country. Hence, I believe that the matter related to our military institutions should not be debated in media and that too pre-maturely. When the time comes, the prime minister will decide in line with the national interest,” he said.
Ahsan Iqbal said Imran Khan was no more than an angry man and he was destined to wander on the streets. He said with the kind of politics Imran Khan was doing by hurling accusations against institutions he was digging his political grave and people will not accept him.
Over a question about Aslam Bhutani — who protested against the coalition government over its failure to issue development funds, Ahsan Iqbal said his complaint was based on a misunderstanding that had been removed.
Ahsan Iqbal said that when the military leadership declared that it did not want to be dragged into politics, it was a victory for the PML-N narrative about respecting the vote. He said the party will go into general elections with the slogan of development.