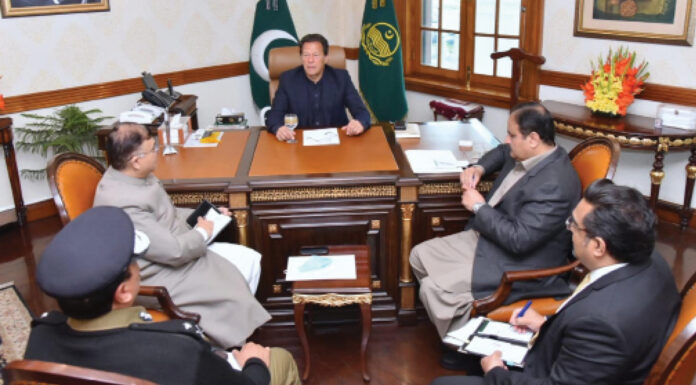 Premier on day-long visit to Lahore; asks chief minister to ensure protection of peoples’ rights, lives and property
LAHORE
Prime Minister Imran Khan has directed Punjab Chief Minister Usman Buzdar to take effective measures to provide maximum relief to the people of the province and ensure quality services to them.
The premier’s directives came during a day-long visit to Lahore on Wednesday where he was also briefed about development projects being carried out across the province.
The prime minister also asked the chief minister to ensure the protection of rights, lives and property of the people and to take stern action against encroachers, hoarders and miscreants.
During the meeting, the issues related to civil administration and law and order of Punjab province were discussed, besides a detailed briefing on the progress of development projects.
Chief Secretary Punjab Kamran Ali Afzal and Inspector General Punjab Rao Sardar Ali Khan were present during the meeting.
Since last week, political parties have beefed up activities in the provincial capital ahead of the local government elections in Punjab. The PTI-led provincial government has reportedly initiated several development projects in almost all parts of the metropolis and major cities as part of its electioneering strategy.
On the other hand, the senior leadership of the PML-N and Pakistan Peoples Party (PPP) is working in close coordination to jointly counter the ruling PTI in the upcoming local government elections.
A week before that, Buzdar chaired a consultative meeting with respect to the local government elections in Punjab. The meeting was also attended by several federal ministers. It reviewed proposals related to the upcoming local body polls and party affairs.
The officials agreed to nominate strong candidates in consultation with the party and underscored that real leadership could emerge at the grassroots with party-based elections, and that direct elections would bring about a real change in the local bodies’ politics.