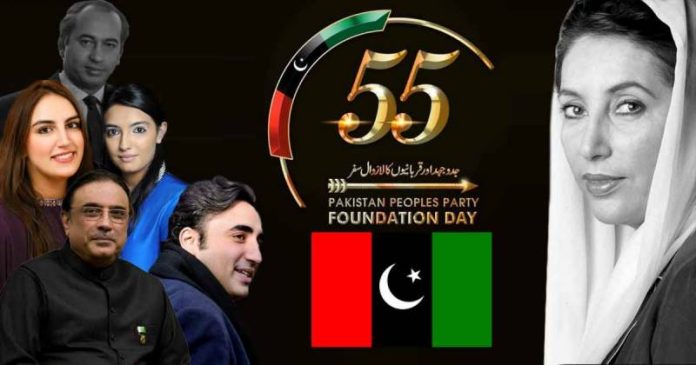 PESHAWAR
55th foundation day anniversary of Pakistan People’s Party (PPP) is being celebrated with enthusiasm and political spirit in all districts of Khyber Pakhtunkhwa tomorrow (Wednesday).
In this connection, a major ceremony would be organized in the Hujra of the district president, Malik Tamash Khan at 2:00 P.M while another similar function is scheduled on the same time under the auspices of City chapter of the party in the Hujra of Pir Mohammad at Nauthia.
Similar functions are also scheduled at Charsadda, Nowshera and Mohmand by Akbar Ali Khan, Saeedullah Khan and Malik Israel Khan respectively.
In his message issued here on Tuesday on the eve of the 55th foundation day anniversary, former provincial president, Engineer Mohammad Hamayun Khan paid tributes to the struggle of the founders of the party for the welfare of the drown-trodden classes of the society.
He said that the leadership and followers of Shaheed Zulfikar Ali Bhutto, the founding chairman of PPP, stick to the principles of ideological politics. He said that strong Pakistan was the dream of the martyred leadership and also the manifesto of the party.
President, PPP Peshawar Division, Liaquat Shabab has also paid tributes to the founding chairman, Zulfikar Ali Bhutto and expressed resolve to continue the struggle for the accomplishment of the mission set by the leadership of the party.