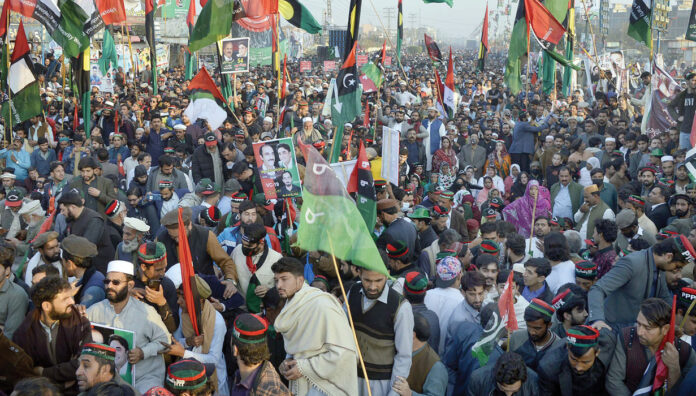 PPP holds power show in Peshawar in connection with party,s foundation day
JAVED KHAN
PESHAWAR
Pakistan People’s Party (PPP) chairman Bilawal Bhutto Zardari on Tuesday revealed that its party would challenge the incumbent government Electronic Voting Machine (EVM) in court, adding that “EVM is the second name of Result Transmission System (RTS) introduced to manipulate upcoming general elections in the country”.
Addressing a public meeting in connection with party foundation day at Peshawar he said PPP had rejected the introduction of EVM for upcoming general elections in the parliament and would stage protest demonstrations nationwide against it.
Bilawal Zardari suggested introduction of a separate electoral college for the overseas voters.
PPP chairman while addressing a public meeting held on Peshawar Ring Road said that the PTI government should quit the IMF deal as it would put the sovereignty of Pakistan at stake. Taking a dig at the premier over recent Pakistan-IMF talks, he said the deal would further increase suffering of the masses in the country.
The PTI government is taking dictates from the IMF for policies announced by its government in the field of economics, he added.
He went on further and said that the PTI government was selected, accusing PM Imran Khan of stealing the public mandate.
Speaking on the occasion, the PPP chairman also criticized the government for keeping parliament in the dark over and was trying to help the spy fleeing the country. PPP was not a facilitator in Kulbhushan Jadhav case, adding the decision will have consequences for years to come and the incumbent government and its leadership would be responsible for it.
Speaking of upcoming local body elections in Khyber Pakhtunkhwa (KP) he said PPP had given party tickets to people mostly young and young leaders all the way out of the country of current problems created by PTI government.
PPP-KP president also spoke at the rally and said that it was a historic event as the workers from other parts of the country had turned up in Peshawar to show power and express love for the party to renew the commitment to the party to face the challenges.
Najuddin Khan said the PTI government had disappointed the nation during its three and half years in the centre and almost eight years in KP.
He said KP would prove to be a political graveyard for the PTI in the next local government election.
Chief Minister Sindh Syed Murad Ali Shah, former CM Syed Qasim Ali Shah, MNA Nafessa Shah, Nisar Khoro, woman MPA Sindh Assembly Ghazala Sial also accompanied PPP chairman Bilawal Bhutto for the public meeting in Peshawar.
A large number of PPP workers and party leadership from all districts attended party’s foundation day Jalsa.