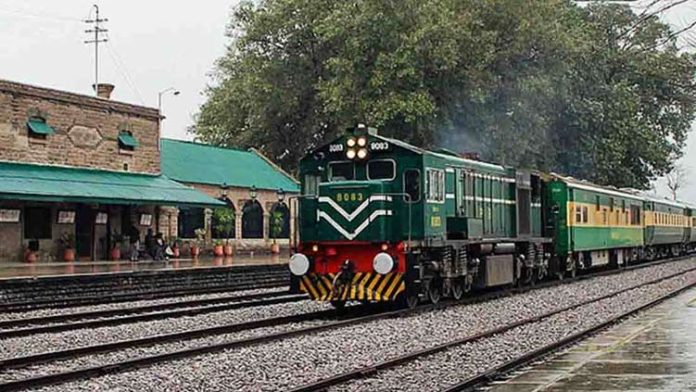 ISLAMABAD
Pakistan Railways has suspended its passenger operation at a track of ML-1 from Khanpur to Hyderabad due to flood near Nawabshah.
Addressing a press conference on Friday, Minister for Railways and Aviation Khawaja Saad Rafique said that railway track of around 10 kilometer near Nawabshah is under flood and there is around 18 inches water there.
He said that Pakistan Railways, divisional headquarters and regional headquarters had decided to close the passenger operation on this particular track of ML-1 while other track of ML-1 from Peshawar to Multan would remain operational.
According to SOPs of Railway, its tracks are closed in case of 6 inches water there and a portion of track near Nawabshah has been flooded with 18 inches water. Only passenger operation is being closed there for safety of the people who would be reimbursed their fare amount, the minister said.
He said that various tracks at ML-2 and ML-3 damaged by flood have been already closed. An important bridge on ML-3 track was swept away in the flood and talks had been underway with NLC for alternate arrangement there to restore the railways operations, he maintained.
The minister said that railway track from Karachi, Hyderabad and Mirpur Khas would remain operational and every railway bridge would be revisited within next 72 hours to tackle any issue there.
He said that shuttle trains would be run in those areas not affected by the flood.
Khawaja Saad Rafique said that a series of meetings were held today to review the situation after flood and it had been decided to set up emergency control room in each division and Railways Headquarters which would work round the clock.
Earlier, he said that meetings were at Prime Minister House after return from Qatar to discuss as how to tackle this catastrophe. He said that Railway had suffered a loss of Rs. 10 billion due to damage to its track and infrastructure after flood and further evaluation was being made on it.
All provinces of the country and Gilgit-Baltistan witnessed unprecedented rain this year and situation had become very challenging after the rain and floods. He said that political leadership should ignore their differences at this critical moment and tackle this challenge through collective wisdom.
The minister said Railways department is suffering a shortfall of Rs. 2 billion per month while a total deficit during the last tenure of PTI was 47.36 billion rupees. He said that all of us should set aside differences at this moment and come ahead to help those suffered due to flood in the country.
He termed the Prime Minister’s tour to Qatar very much successful and said that Qatar had showed interest to invest in various sectors including modernization of airports. He said that propaganda was being made about selling Karachi airport, PIA and Roosevelt hotel which was really shameful.
The minister said that Qatar wanted to invest three billion dollars in Pakistan and discussions were held for the upgradation of Port Qasim. The minister appealed not to politicize such issues and come forward to help the nation which is in emergency due to devastating flood in the country.