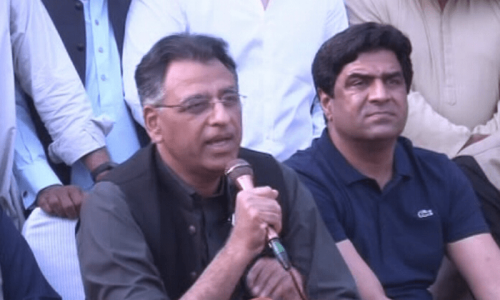 The PTI on Saturday filed a petition in the Supreme Court seeking a judicial investigation into the recently surfaced audio recordings — of purported conversations between Prime Minister Shehbaz Sharif and federal ministers — regarding the resignation of PTI MNAs from the National Assembly.

In one of the many recordings, a conversation between the prime minister, Defence Minister Khawaja Asif, Law Minister Azam Nazeer Tarar, Interior Minister Rana Sanaullah and Ayaz Sadiq about the resignations of PTI lawmakers from the lower house of parliament.

PTI lawmakers had resigned en masse from the NA on April 11, following the ouster of party chief Imran Khan as the premier through a no-confidence motion.

Then-NA deputy speaker Qasim Suri, in the capacity of the House’s acting speaker, had subsequently accepted the resignations of 123 PTI MNAs. However incumbent NA Speaker Raja Pervaiz Ashraf decided to verify the resignations and on July 27 accepted 11 of them.

The PTI had challenged the move in the IHC on August 1, contesting that it was “unsustainable”.

The IHC, however, dismissed the petition on September 6 and declared that the acceptance of PTI lawmakers’ resignations by Suri was unconstitutional.

The PTI had subsequently approached the SC, praying it to set aside the IHC order, terming it “vague, cursory and against the law”.

In the petition filed today, PTI contended that in the recently surfaced audio leaks, PM Shehbaz and federal ministers could be heard discussing a “heinous strategy to outplay the petitioner from the parliamentary politics in the most illegal, unlawful and objectionable manner”.

“The entire discussion revolves around a criminal strategy/conspiracy to affect and target the petitioner through (illegal and unlawful) piecemeal acceptance of the resignations tendered by the members of the National Assembly on the 11th day of April 2022, belonging to the petitioner party.”

It stated that the incumbent NA speaker and the NA secretary were involved in the “conspiracy”. PM Shehbaz and federal ministers Rana Sanaullah and Marriyum Aurangzeb have also admitted the “actuality and existence of the referred audio leaks,” it said.

“After the admission from the incumbent office holders, the revelations surfaced through the audio leaks are to be treated as new facts emerged during the pendency of the proceedings before this august court, therefore, request to take judicial notice of the startling revelation deemed most appropriate,” the petition prayed.

Furthermore, it claimed that the prime minister, NA speaker and federal minister had violated their oath. “Criminal proceedings may very graciously be lodged against them,” it said.

In a tweet later in the day, PTI leader Fawad Chaudhry confirmed the development.