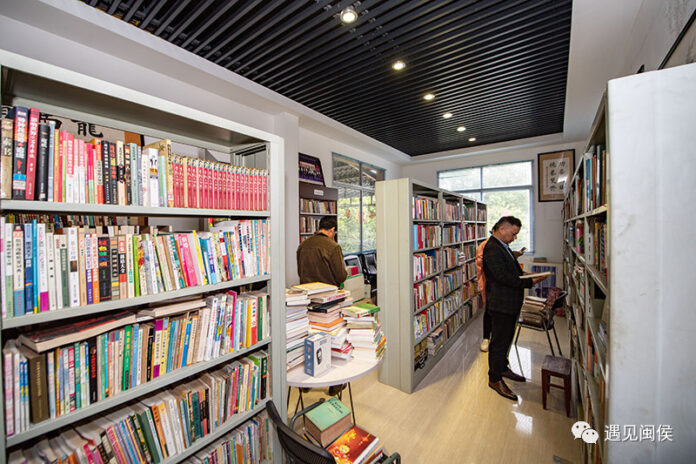 Before 7 a.m., a three-story house in Makeng village, Baisha township, Minhou county, Fuzhou city, east China’s Fujian province, is already bustling with people. The house looks just like an ordinary rural house, only it has a library in it.
A sign hanging at the door of the house reads “Baishawan Library”. The sign has faded a bit, but the name of library is well-known to locals.
Baishawan Library was started by Lin Lixing, father of a local villager named Lin Yuekeng. In 2011, Lin Lixing visited a library in a neighboring township, and saw villagers read and study there. Deeply inspired by what he saw, he quickly transformed the first floor of his house into the public-interest library after he returned home.
As the first library in Baisha township, Baishawan Library has been popular since it opened. According to Lin Yuekeng, visitors crowded the library on its first day. It greatly gratified Lin Lixing, who was in his seventies then, to see that the library was full of students between 12 p.m. and 2 p.m. every day. Taking delight in helping children enjoy books, he was busy working in the library all day and didn’t have time to take a noon break. At night, after the last reader left, he started to rearrange books.
In the third year after the opening of the library, Lin Lixing passed away. After his father’s death, Lin Yuekeng hesitated about continuing to run the library. “The library is completely non-profit and requires a lot of manpower and material resources,” explained Lin Yuekeng. But he finally decided to keep it running, considering his fellow villagers’ thirst for knowledge and his father’s last wish.
“With this library, we don’t have to go to the urban areas of Fuzhou city to read books or buy books ourselves, because we can read here to increase our knowledge for free,” said Chen Meifang, a villager who is a regular of the library.
Now is the busiest time of the year for citrus growers, including Chen. After spraying her fruit trees with pesticide in the morning, Chen, still in her sun hat and muddy shoes and clothes, went straight to the library eagerly. She found a book on green measures to prevent and control citrus diseases and insect pests and started reading.
“The book has everything I need to know. For example, what fertilizer should be applied, what pesticide should be used, and what precautions should be taken at each stage, from sprouting and blooming to fruiting, are clearly written in it,” Chen said.
In 2006, Chen planted only dozens of mu (one mu equals about 666 square meters) of navel orange trees. As her knowledge of and experience in navel orange tree planting increase, she has become a major grower and an expert in the field in Makeng village. Her “business” could not have flourished so well without Baishawan Library, according to Chen.
“I’ll take this book home to read. Could you get me a book on growing peach trees? I got the use right of more than 100 mu of farmlands this year, and I’m going to plant peach trees,” Chen said to Lin Yuekeng. “No problem. Just come and take it next week,” Lin replied.
The library purchases books based on the requirements of residents. Villagers tell the library what books they need, and the library then help get the books for them.
Over the past 11 years, the number of bookshelves in the library has increased from one to more than 20, and the number of books has risen from 2,000 to over 30,000 in 18 categories, making the public-interest rural library with the largest collection of books in Minhou county.
Almost every family of the nearly 400 households in Makeng village has the phone number of Lin Yuekeng. Villagers give him a call anytime they need new books. Lin works in Baisha township from Monday to Friday. He buys the books his fellow villagers need in the township and takes them to the library every Friday after work.
“My trunk is often stuffed with books. Sometimes I also buy books online,” Lin told People’s Daily.
Today, besides residents of Makeng village, many construction workers nearby also read and borrow books from Baishawan Library, which has brought knowledge and companionship to nearly 10,000 people living in the three or four surrounding villages.
The small library has received support from many people, according to Lin, who disclosed that many villagers and college students living nearby have worked as volunteers in the library, and many people, public institutions, and enterprises have donated books and bookshelves to the library.
The popular reading parties and sharing activities held regularly at the library have attracted and benefited many participants.
Though the library requires a lot of efforts, Lin and his family will stick to the rewarding cause so as to attract more people to reading, according to him.