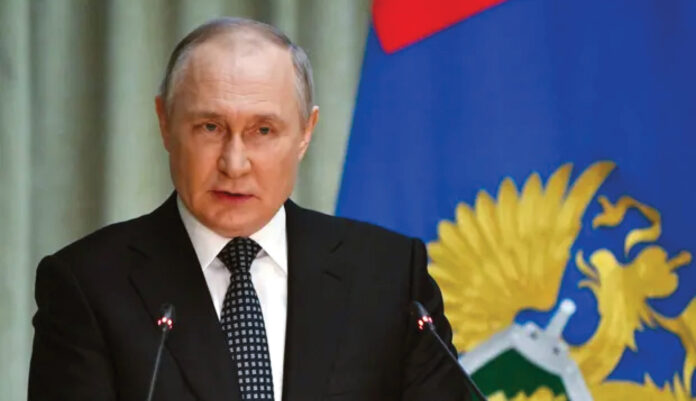 Tass reports arrest of members of neo-Nazi group allegedly plotting to kill TV host on Ukraine’s orders
Moscow
Vladimir Putin has claimed his country’s Federal Security Service (FSB) spy agency has foiled what he said was a western plan to kill a prominent Russian journalist.
“This morning, the Federal Security Service stopped the activities of a terrorist group that planned to attack and kill one famous Russian TV journalist. … We have indisputable facts,” the Russian president said during a meeting with his country’s top prosecutors.
“After experiencing an information fiasco in Russia, the west has now turned to attempts to kill Russian journalists,” Putin added, without providing evidence to support his claim.
Shortly after Putin’s statements, the Russian news agency Tass said the security services had arrested Russian members of a neo-Nazi group called National Socialism/White Power that was allegedly plotting to kill the popular pro-Kremlin state TV host Vladimir Solovyev on Ukraine’s orders.
Tass said the security services seized a number of weapons as well as eight Molotov cocktails and six pistols during the arrest of the group.
The FSB frequently claims to foil terrorist acts plotted by what it says are far-right groups acting on behalf of Ukraine, without providing much evidence to support their allegations. Days prior to Moscow’s invasion of Ukraine, Russia’s security services also accused Kyiv of a number of attacks on Russian territory and the separatist-held Donbas, claims that were later debunked by independent journalists.
Putin on Monday further said that the west was attempting to destroy Russia from the inside.
“The task of splitting Russian society, destroying the country from the inside, has come to the fore for the west, but their efforts will fail,” Putin said, adding that Russian society had “never been more united”.
Putin also accused the west of using foreign media organisations and social media to organise “provocations” against Russia’s armed forces.