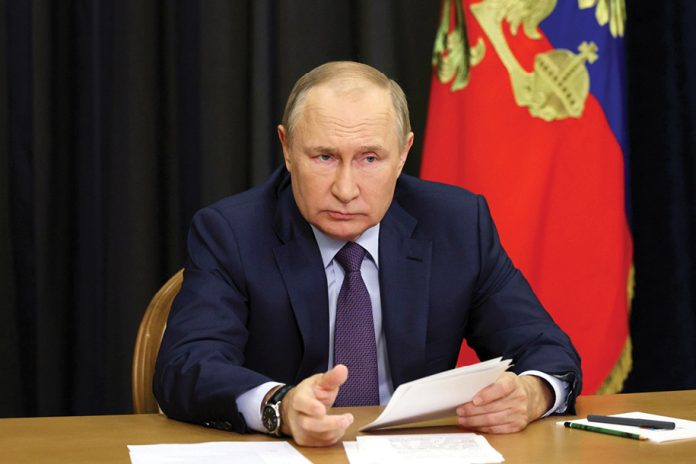 MOSCOW
President Vladimir Putin has completed the formal annexation of more than 15 percent of Ukraine, just as Russian forces battle to halt a Ukrainian counter-offensive across swathes of the territories.
In the biggest expansion of Russian territory in at least half a century, Putin signed Wednesday laws admitting the Donetsk People’s Republic (DPR), the Luhansk People’s Republic (LNR), Kherson region and Zaporizhzhia region into Russia.
“Russian President Vladimir Putin has signed four federal constitutional laws on the entry of the Donetsk and Luhansk People’s Republics, Zaporozhye and Kherson regions into the Russian Federation,” the lower house of parliament said.
“He also signed the relevant laws on ratification.”
Russia declared the annexations after holding what it called referendums in occupied areas of Ukraine. Western governments and Kiev said the votes breached international law and were coercive and non-representative.
The areas that are being annexed are not all under control of Russian forces. Russia’s total claim amounts to around 18 percent of Ukrainian territory, though the exact borders are still to be clarified.
Ukrainian President Volodymyr Zelenskyy said on Tuesday his forces were making “rapid and powerful” gains in southern Ukraine and that they had retaken “dozens” of villages from Russia this week.
Some of the territory was taken back in the regions of Kherson, Luhansk and Donetsk, he said, where the controversial referendums were held last week on being annexed by Russia.
Zelenskyy cited eight settlements in the southern Kherson region, where Moscow’s forces have retreated in the face of a sweeping Ukrainian counter-offensive, according to maps presented by the Russian defence ministry on Tuesday.