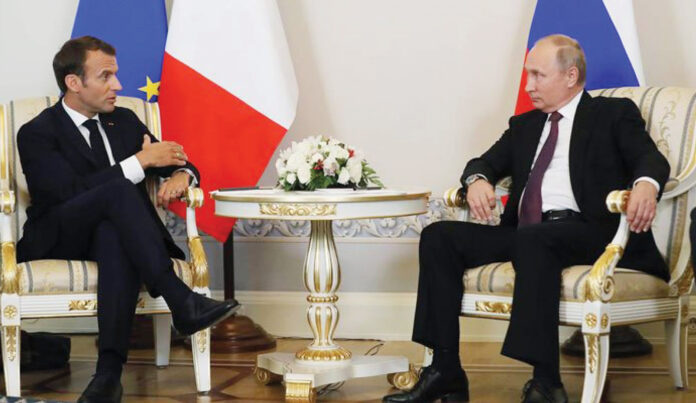 MOSCOW
Russian President Vladimir Putin said he was ready for compromise and would look at proposals put forward by French leader Emmanuel Macron in talks on Monday, while still blaming the West for raising tensions over Ukraine.
Emerging from nearly five hours of talks in the Kremlin, the two leaders voiced hope that a solution could be found to the worst crisis between Russia and the West since the end of the Cold War.
Repeatedly thanking Macron for coming to Moscow, Putin said at a joint press conference that the French leader had presented several ideas worth studying.
“A number of his ideas, proposals… are possible as a basis for further steps,” Putin said, adding: “We will do everything to find compromises that suit everyone.”
He did not provide any details but said the two leaders would speak by phone after Macron meets with Ukrainian President Volodymyr Zelensky on Tuesday.
Macron said he made proposals of “concrete security guarantees” and that Putin had “assured me of his readiness to engage”.
The French presidency said the proposals include an undertaking from both sides not to take any new military action, the launching of a new strategic dialogue and efforts to revive the Ukrainian peace process.
Putin again denied that Russia was acting aggressively, despite Western fears of a possible invasion of Ukraine after Russia amassed tens of thousands of its troops on its borders.
“It is not us who are moving towards NATO’s borders,” he said, in reference to alliance deployments in eastern Europe.
– Biden threatens gas pipeline –
The meeting in Moscow came at the start of a week of intense diplomacy over the Ukraine crisis, with US President Joe Biden also hosting German Chancellor Olaf Scholz in Washington on Monday.
Biden made a categorical vow at the talks to shut down the controversial Nord Stream 2 gas pipeline from Russia to Europe if Moscow launches an invasion.
“If Russia invades — that means tanks or troops crossing the border of Ukraine, again — then there will be no longer a Nord Stream 2,” Biden told a joint White House news conference with Scholz, following bilateral talks in the Oval Office.
“I promise you,” Biden said, “we will bring an end to it.”
US officials say Moscow has assembled 110,000 troops near the border with Ukraine and is on track to amass a large enough force — some 150,000 soldiers — for a full-scale invasion by mid-February.
Russia insists it has no plans to attack and has instead put forward its own demands for security guarantees.
It is demanding a permanent ban on Ukraine, a former Soviet republic, joining the US-led alliance and that the bloc roll back its military presence in eastern Europe.
Macron, whose country currently heads the European Union has tried to position himself as the key EU figure in negotiations with Russia.
– UK, German troops to deploy –
Germany’s new government has come under criticism from Ukraine and some in the United States over accusations that it is not fully engaging with US-led efforts to push back against Russian military pressure on Ukraine.
But Biden and Scholz in Washington insisted there were no disagreements on how to deal with Moscow.
“We’re working in lockstep to further deter Russian aggression in Europe,” Biden said in the White House’s Oval Office.
“We are close allies and we act in a coordinated and united way, when it comes to responding to the current crises,” Scholz told reporters earlier Monday, saying Russia would pay “a very high price” if it attacks Ukraine.
Biden has reacted to the Russian troop build-up by offering 3,000 American forces to bolster NATO’s eastern flank, with a batch of the troops arriving in Poland on Sunday.
Britain said Monday that 350 more British troops would be sent to the Polish border and Germany announced that another 350 of its soldiers would go to Lithuania.
While Scholz is in Washington, his foreign minister, Annalena Baerbock, was in Kyiv along with her Czech, Slovak and Austrian counterparts for a two-day visit.
Scholz himself will be in Moscow and Kyiv next week for talks with Putin and Zelensky.
Visits to Moscow by the British foreign and defence secretaries are also expected at the end of this week.