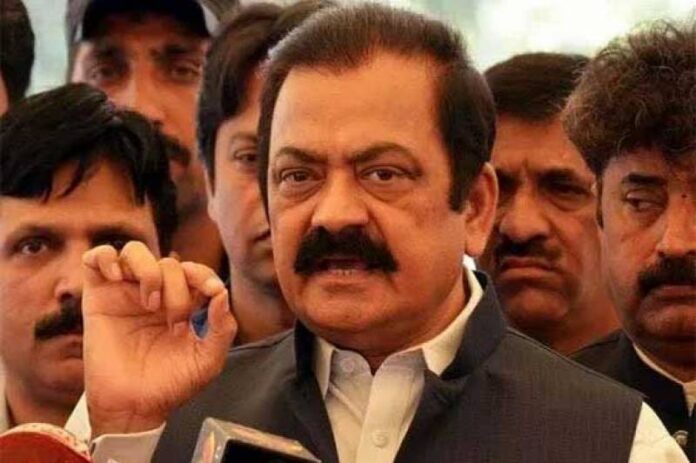 I can confirm as the interior minister that no torture was carried out against Gill, says Rana Sanaullah
ISLAMABAD
Interior Minister Rana Sanaullah said Sunday that the Pakistan Tehreek-e-Insaf (PTI) had been playing a farce on the issue of Shahbaz Gill for 10 days. “I refute with full responsibility any torture of Shahbaz Gill in police custody,” he declared.
According to a private television channel report, the interior minister said that the PTI launched a campaign against the martyrs of the Lasbela helicopter crash tragedy.
“An organised campaign was carried out against the martyrs at the behest of Imran Khan. They hurt the feelings of the families of the martyrs,” he said while addressing a press conference in Islamabad.
Rana Sana deplored, “The PTI has been playing a farce on the issue of Shahbaz Gill. The junior officers of the Pakistan Army were provoked to disobey the orders of senior command. Politicians criticise the establishment, but no one directly provoked the army.”
He added, “Shahbaz Gill was smiling in the video that recently came out. He did not speak before the judicial magistrate. He was not tortured during three days in the police custody. I refute all claims of torture with full responsibility.” He stated, “We oppose violence, whether it is mental or physical. During the tenure of Imran Niazi, the entire leadership of Pakistan Muslim League-Nawaz (PML-N) suffered from mental torture.”
He deplored, “Now Imran Khan has made Shahbaz Gill a victim of sexual violence. Efforts are being made to further strengthen the farce of Shahbaz Gill.”
Rana Sana said, “The narrative of Imran Khan is an anti-state narrative. He made such accusations against Pakistan which the enemy country did not make. A case will be registered against Imran Khan for criticism of the heads of institutions in Islamabad.” He also pointed out, “No doctor has the cure of Shahbaz Gill.
His cure lies with me only. Imran Khan’s rally falls under the category of a rebellion. He threatened the police chief and a judge. He will be arrested and booked for the speech. Cases will also be registered against people stood beside Imran Khan.”