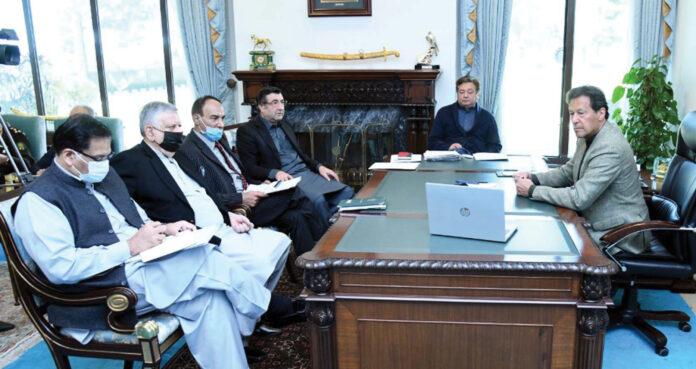 Directs to expedite Covid vaccination process
ISLAMABAD
Prime Minister Imran Khan has said that overseas Pakistanis are a precious asset of the country and the government is taking unprecedented steps to facilitate them.
Chairing a meeting of Roshan Digital Accounts on Friday, the prime minister said that the government’s measures like granting voting rights to overseas Pakistanis and online issuance of certificates of power of attorney and inheritance will have far reaching impact for their welfare and facilitation.
The prime minister was apprised that remittances worth over $3 billion have so far been received through Roshan Digital Accounts.
Imran Khan directed the State Bank of Pakistan to provide online facilitation on a real time basis to overseas Pakistanis for sending their money to Pakistan. He also instructed the concerned authorities to launch an effective marketing campaign to convince overseas Pakistanis to use Roshan Digital Accounts.
Meanwhile, the prime minister commended the performance of National Command and Operation Centre and the Ministry of National Health Services and directed them to ensure implementation of SOPs and expedite vaccination.
The prime minister chaired a meeting regarding anti-corona measures on Friday.
He commended the sacrifices and services of the frontline workers in containing the spread of the contagion. The prime minister said that Covid-19 pandemic has the least effects on industries and economic activities as a result of relief measures taken by the government.
The meeting was informed that omicron cases have started declining in Pakistan due to the government’s measures to ensure strict implementation of standard operating procedures (SOPs).
The meeting was informed that the number of Omicron patients receiving intensive care is 71 percent less than the fourth wave.
Since yesterday, the number of positive cases decreased by 6.8 percent, while hospitalization and the need for intensive care did not increase, which is a positive trend? It was said that the new wave of Corona in Pakistan is causing an average of 42 deaths per day.
Besides, the meeting was briefed on the progress made on the corona vaccine. It was said that 90 million out of 150 million people over 12 years of age have been fully vaccinated so far and this number will increase to 110 million by next month. In addition, 115 million people have received a single dose and will reach 130 million by next month.
At present, 61,329 teams are working for the first phase of Every Pakistani is Safe vaccination in the country and doses of 2.2 million vaccines are being administered daily. Vaccination Phase II will begin on the 7th of next month. Fifty nine percent of students between the ages of 12 and 17 have been fully vaccinated and 3.4 million people over the age of 18 have been given booster doses.
The meeting was further informed that there is sufficient stock in the country for vaccination of the entire population.
At the provincial level, Punjab ranks first in terms of vaccine speed, followed by Sindh, Khyber Pakhtunkhwa, Balochistan and other areas.
The meeting was also briefed on the future course of action regarding vaccination and appreciation of the front line health workers during the Corona pandemic. TLTP