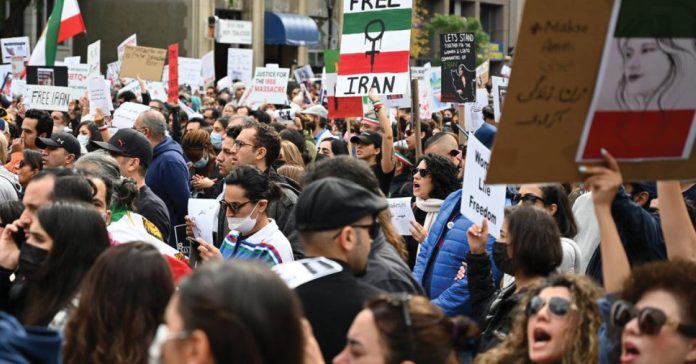 MONTREAL
Several thousand people marched in Montreal and other Canadian cities on Saturday in solidarity with protests sparked by the death of Mahsa Amini in the custody of Iran’s notorious morality police.
A wave of street violence has rocked Iran since Amini, 22, died days after her arrest for allegedly failing to observe the Islamic republic’s strict dress code for women.
Protests were held across the country for a 15th consecutive night on Friday despite a bloody crackdown that rights groups said has left more than 75 people dead.
Tens of thousands have also come out for solidarity rallies in several Canadian cities, including Vancouver, Toronto and the capital Ottawa.
A protest also took place Saturday in the US capital Washington where hundreds of members of the Kurdish community, some bearing placards calling for regime change in Tehran, gathered outside the White House gates.
In Canada, public broadcaster CBC showed images from Toronto on Saturday of motorists honking their support for demonstrators lining a 5km stretch of road, wearing “Justice for Mahsa Amini” t-shirts and waving Iranian flags on the end of hockey sticks.
In Montreal, several women cut their hair as a crowd of more than 10,000 waved placards that read “Justice” and “No to Islamic Republic,” while chanting “Say her name. Say her name”.
“It was for the Iranian women who are fighting for their freedom, for their lives in Iran,” a 30-year-old expatriate who only gave her name as Sin told AFP after chopping off her long dark locks.
She described cutting off her hair that flowed almost to the middle of her back as “nothing compared to” what women in Iran have endured.
“This is the least we can do to support my country, my women, my people in Iran who are under repression,” she said.
March co-organiser Nima Machouf, 57, added it was important to “be a voice for people in Iran and carry their message” to the world.
Several demonstrators called for regime change in Tehran, and for Canada to increase sanctions.
Ottawa has already applied sanctions over Iran’s nuclear programme and Prime Minister Justin Trudeau announced a new round on Monday against dozens of Iranian officials.
Reza, 42, came with his family, including his little girl and echoed the sentiment. “If we remain silent, what will we say to other generations?” he commented.