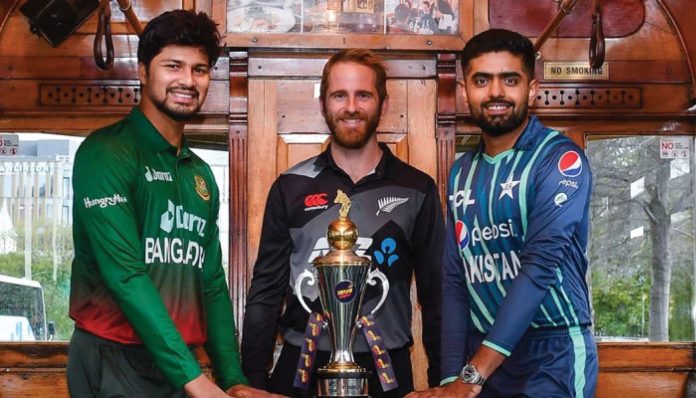 New Zealand
The trophy for the triangular series featuring Pakistan, Bangladesh, and New Zealand has been unveiled two days ahead of the first match, scheduled to be played on September 7.
The series will kick off with the match between Bangladesh and Men in Green, who reached New Zealand yesterday (September 4).
Pakistan Cricket Board (PCB) on Wednesday released pictures from the trophy reveal event in a Twitter post. The pictures featured the skippers of three teams participating in the event.
The Men in Green will face tough conditions during the matches as chilly weather welcomed them in Christchurch.
The temperature in New Zealand city sometimes drops to 2 degrees celsius and intermittent rains have made things a bit more difficult for the Pakistani players.
The Green Shirts will start practising on Thursday (October 6), after resting today. All the matches of the tri-series will be played in Christchurch, with the first fixture between Pakistan and Bangladesh due on October 7, and the series decider on October 14.
Those slated to play the ICC T20 World Cup will fly to Australia directly from Pakistan.
Following the tri-series, Pakistan’s squad will participate in the highly-anticipated mega T20 event and will travel back to Australia on October 15 for an action-packed World Cup 2022.
The team will partake in a practice session on October 17 and 19, ahead of its games in the World Cup.
The T20 World Cup begins on October 16 with the inaugural matches of the qualifiers to be played between Group A teams Sri Lanka and Namibia, as well as UAE and Netherlands.