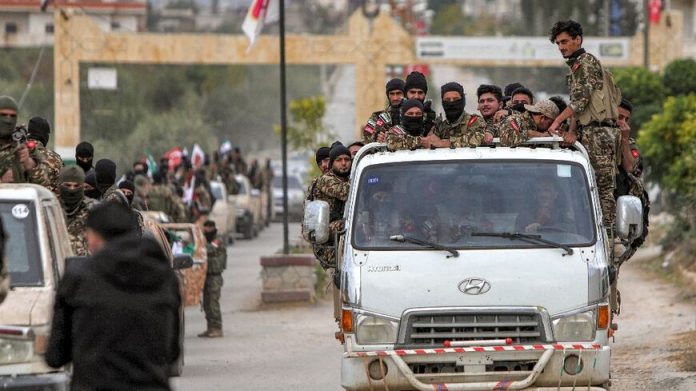 ANKARA, Turkiye
Türkiye’s air operation in northern Iraq and Syria to clear the regions of terrorists is “just the beginning,” President Recep Tayyip Erdogan has said, adding that the country will launch a ground operation in Syria “when convenient.”
“Our operations with aircraft, artillery, and UCAVs (unmanned combat aerial vehicles) are just the beginning,” Erdogan told the Justice and Development (AK) Party group meeting in the capital Ankara on Wednesday.
“We will come down hard on the terrorists with a land operation at the most convenient time,” Erdogan said.
Early Sunday, Türkiye launched Operation Claw-Sword, a cross-border aerial campaign against the terror group YPG/PKK which has illegal hideouts across the Iraqi and Syrian borders where they plan attacks on Turkish soil.
The country’s air operation followed a YPG/PKK terror attack on November 13 on Istanbul’s crowded Istiklal Avenue that killed six people and left 81 injured.
Erdogan said Türkiye has the power to catch and punish terrorists inside and outside borders who are involved in attacks against the country and the nation, and stressed that Ankara is more determined than ever to secure its southern border.
Türkiye has remained faithful to its promises regarding the borders of Syria, Erdogan added, saying: “If our interlocutors cannot fulfill the requirements of the agreement, we have the right to take care of ourselves.”
He added that Iraqi and Syrian administrations should not feel uneasy with the operation since the country’s only aim is to protect the security of its nation, as well as the people of the neighbouring countries.
“No one can prevent or stand up against us to draw the security line to the place where it should be, where these attacks on our borders and our citizens continue,” Erdogan said.
Forces who gave assurances that Türkiye will face no threat from areas under their control have failed to keep their promises, he stressed.
“Our message to those who are still attempting to bring Türkiye to its knees with insidious methods is clear: ‘You will never succeed’,” Erdogan said.