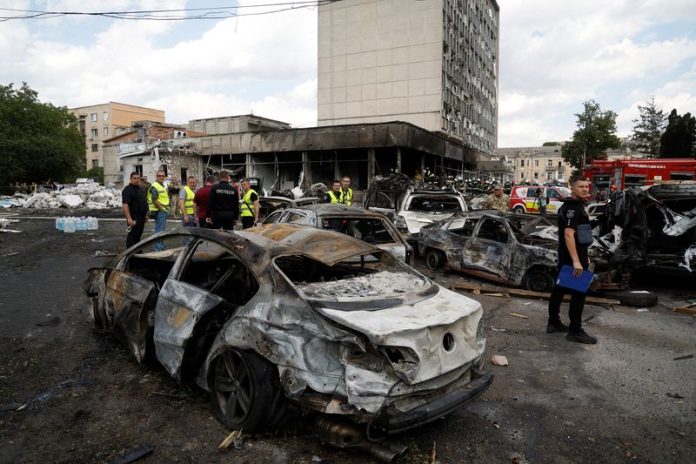 VINNYTSIA
A Ukrainian city far from the frontline grieved its dead from a missile strike, including a 4-year-old girl, as Russian bombardment rained down on towns across the country.
Ukraine said Thursday’s strike on an office building in Vinnytsia, a city of 370,000 people about 200 km (125 miles) southwest of Kyiv, had been carried out with Kalibr cruise missiles launched from a Russian submarine in the Black Sea. Kyiv said the attack killed at least 23 people and wounded dozens.
The missiles destroyed a nearby medical center and some people arriving for treatment were burnt alive in their cars outside, the owner of the center said. Two doctors were severely wounded.
The attack was the latest in a series of Russian hits in recent weeks using long-range missiles on crowded buildings in cities far from the front, each killing dozens of people.
Late on Friday, Russian missiles hit the central city of Dnipro, killing three people and wounding 15 others, governor Valentyn Reznychenko said on Telegram. Rockets hit an industrial plant and a street next to it, he said. Footage on social media showed thick black smoke rising from the buildings and burning cars.
Eight people were killed and 13 injured in a string of shellings in 10 locations in the eastern Donetsk region, its regional governor, Pavlo Kyrylenko, said in a television interview.
“Right now, as I am writing this address, there is an air alarm over almost the entire territory of our state. There is preliminary information about hits — Dnipro, Kremenchuk, Kyiv region,” Ukrainian President Volodymyr Zelensky said in a Telegram post. In Vinnytsia, residents placed teddy bears and flowers at a makeshift memorial to those killed in Thursday’s attack.
Among the dead was Liza, a 4-year-old girl with Down’s Syndrome, found in the debris next to a pram. Images of her pushing the same pram, posted by her mother on a blog less than two hours before the attack, quickly went viral.
Her severely injured mother, Iryna Dmitrieva, was being kept in an information blackout at a hospital for fear that finding out about her daughter would kill her, doctors said.
“She is suffering from burns, chest injuries, abdominal injuries, liver and spleen injuries. We have stitched the organs together, the bones were crushed as if she went through a meat grinder,” said Oleksandr Fomin, chief doctor at the Vinnytsia Emergency Hospital. Were she told of her daughter’s death, “we would lose her.”
The building housed an officers’ club, which Russia’s defense ministry said was being used for a meeting between military officials and foreign arms suppliers. It added: “The attack resulted in the elimination of the participants.”
Ukraine said the club functioned as a cultural center. The building also housed shops, commercial offices and a concert hall, where musicians were rehearsing for a pop concert planned for that night.
Authorities in the southern city of Mykolaiv, closer to the frontlines, also reported fresh strikes on Friday which wounded at least two people.