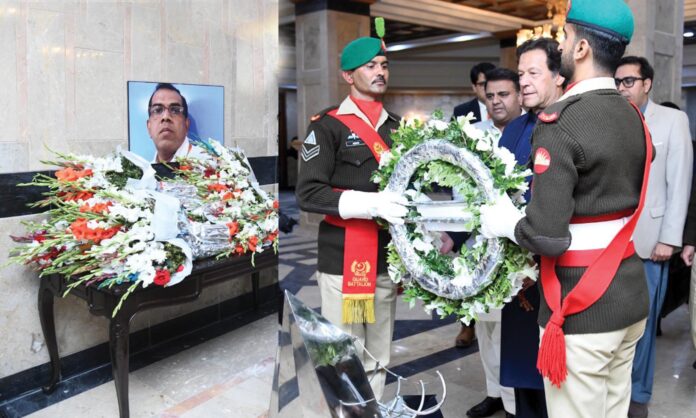 Says the Sialkot lynching has brought the nation ‘embarrassment’
ISLAMABAD
Prime Minister Imran Khan has emphatically stated that nobody will be spared for perpetrating violence under the garb of religion.
Addressing a condolence reference in memory of Sri Lankan national, Priyantha Diyawadana on Tuesday, the prime minister said that Hazrat Muhammad (PBUH) was sent by Allah Almighty as a blessing for the whole mankind.
He said the Holy Prophet Muhammad (PBUH) brought an ideological revolution and united the humanity through message of love and justice.
Regretting the lynching of the Sri Lankan national in Sialkot, the Prime Minister said the incident brought embarrassment to the entire nation and dented its image.
Khan said the purpose of establishing Rehmat Ul-lil-Alameen Authority is also to bring together all religious scholars and educate youth about the life and teachings of the Last Prophet.
The prime minister said the business community of Sialkot has collected one hundred thousand dollars to be provided to the bereaved family of Priyantha Diyawadana. He said the bereaved family will also continue to receive the monthly salary.
Appreciating the courage of Malik Adnan, who put his life at risk to save the life of the Sri Lankan national, the Prime Minister said Malik Adnan will be conferred with Tamgha-e-Shujaat.
On the occasion, the prime minister also presented him with a letter of appreciation.
Later, talking to the media, Malik Adnan thanked the prime minister for announcing Tamgha-e-Shujaat for him and giving him a letter of appreciation. He said that he would like to dedicate these awards to the family of Priyantha Diyawadana.