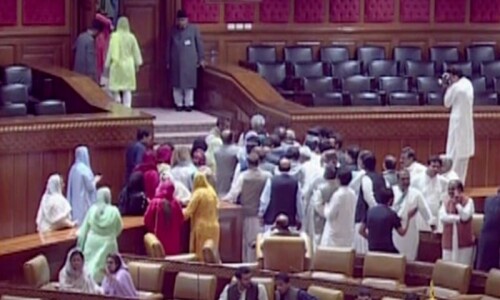 Lawmakers in the Punjab Assembly (PA) are currently voting to elect the next chief minister of the province in a session that began after a three-hour delay.

The crucial session is being presided by Deputy Speaker Dost Muhammad Mazari.

While the voting was underway inside the House, unconfirmed reports were circulating outside that PML-Q Chairperson Chaudhry Shujaat Hussain had written a letter distancing himself from Elahi’s candidacy.

Geo News journalist Hamid Mir quoted PML-Q’s Moonis Elahi as saying that Shujaat had refused to back Parvez as PTI’s candidate. Soon after, however, Moonis tweeted that a joint parliamentary meeting of PML-Q and PTI had unanimously agreed upon Parvez as their candidate for the election.