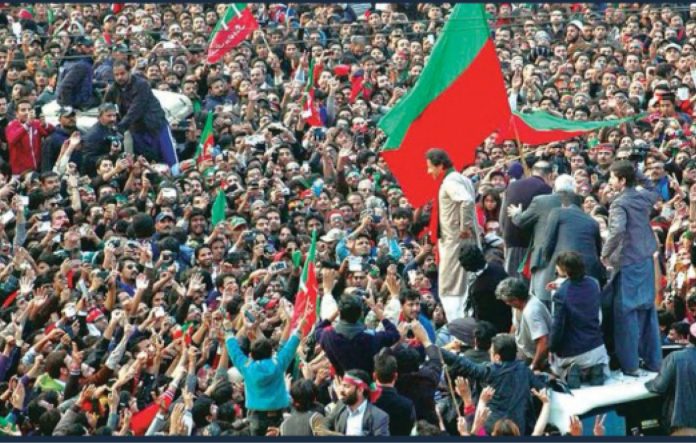 Those involved in imposing the system of tyranny will be held accountable on the day of judgement, says PTI chief
Islamabad
Former prime minister and Pakistan Tehreek-e-Insaf (PTI) Chairman Imran Khan has asked the state institutions as to why did they allow ‘crooks’ to come into power by toppling his legitimate government through a no-trust vote in parliament earlier this year.
He made these remarks while addressing his party’s power show at Islamabad’s Parade Ground, which was held to protest against the coalition government led by PML-N on Saturday night.
“I did not stage a sit-in because we knew that a sea of people will come out in the evening and there were chances of clashes as people were angry due to police crackdown on protesters,” he said while referring to the much-hyped ‘Haqeeqi Azadi March’ protest that he called off abruptly in May.
Imran said the incumbent rulers wanted PTI to clash with institutions and law enforcement agencies but his decision to end the protest in the federal capital averted bloodshed.
The former premier said the incumbent rulers did not have any stake in the country as all their “stolen assets” were stashed abroad.
“It makes no difference to them if currency depreciates and country suffers setbacks because they don’t have to live and die here,” he added.
Calling the Sharif and Zardari families corrupt, Imran asked the institutions, “Why did you allow thieves to be imposed on Pakistan”.
“Is curbing corruption from the country only my responsibility? They closed down corruption cases worth billions of rupees by amending the NAB law,” he remarked.
“Isn’t it your responsibility too? Or only I am responsible to protect this country,” the former PM asked the institutions.
“People have taken to the streets across the country and they are sending the message through protests to the institutions that there is still time to save this country from thieves.”
Imran said people neither have accepted the “US conspiracy” nor will they allow these “thieves” to rule.
While referring to a statement of Prime Minister Shehbaz Sharif and other political leaders, Imran said no premier ever in the world has called his nation “beggars”.
“These two families have been ruling this country for 30 years then who is responsible for destroying this country,” Imran said while referring to Defence Minister Khawaja Asif’s statement that country was on ventilator.
“I want to send a message to everyone that if someone thinks that people of this country will accept those who worship money, then listen to me you are wrong.”
Condemning last night’s attack on senior journalist Ayaz Amir in Lahore, Imran said such tactics cannot silence the dissent as people have broken the “idol of fear”.
“I want to a send a message to my institutions that the intimidation tactics to silence the dissent and lodging FIRs against journalists will not work.”
Speaking about the upcoming by-elections in Punjab, Imran said PML-N can never win the polls without rigging it.
“They will rig the elections with the help of Election Commission of Pakistan which has become controversial and biased… it can never conduct free and fair elections.”
The former premier said he introduced electronic voting machines (EVMs) to make the electoral process transparent. “All political parties and the ECP did not allow elections to be held through EVM,” he added.
“They [political opponents] can only win this through rigging because people are against them… not people but umpire is with them.”
Imran vowed to win the forthcoming by-elections, saying despite alleged rigging attempts his party will defeat the rival parties.
“We will never accept this imported government… no matter what tactics they employ, people will never accept them.”
The PTI chairman led a convoy to the venue from Rawalpindi earlier in the day.