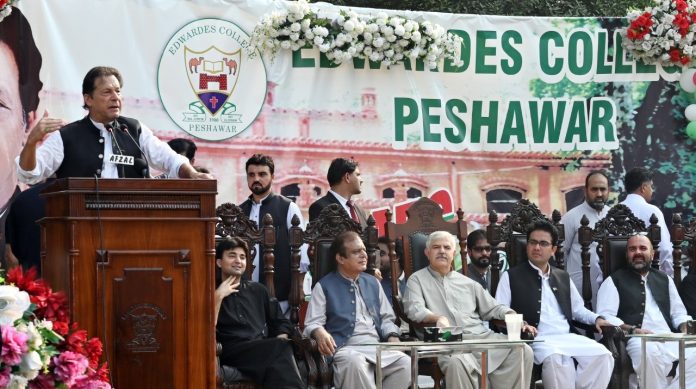 If poor steals, he is sent to jail; if powerful steals, he gets NRO: PTI chairman
PESHAWAR
Pakistan Tehreek-e-Insaaf (PTI) chairman and former prime minister Imran Khan on Friday reiterated his determination to continue the struggle against corruption and upholding rule of law in the country.
He said those who did not take a stand for sovereignty of the country, they will continue to remain subservient.
He expressed these views while addressing students of the Edward College Peshawar.
Chief Minister Khyber Pakhtunkhwa Mahmood Khan, Senator Shibli Faraz, Kamran Bangash, Provincial Finance Minister Taimur Saleem Jhagra and others were also present on this occasion.
Imran Khan said that the leaders always fight for ensuring transparency in the system and maintaining rule of law, adding that without an independent judiciary and honest leadership, no nation can claim to be sovereign and independent.
“Prophet (PBUH) is the greatest leader of the world who laid the foundation of the first Islamic state on the rule of law and justice,” he maintained and said that the developed nations of the West still follow the basic principles of the Prophet (PBUH).
He added that there should be no discrimination in law for poor and wealthy in the country and termed rule of law solution to all problems.
PTI chairman said that his party was struggling for the accountability of powerful corrupt figures in the society.
“Poor are in jails and influential thieves are walking free even after looting the resources of the country ruthlessly,” he claimed. He criticized the Pakistan Democratic Movement (PDM) alliance for introducing new amendments in certain laws to facilitate themselves and leaders of the incumbent government.
He alleged that the ‘imported rulers’ have introduced a number of amendments in NAB laws to pave the way for looting national kitty without any fear of accountability.
Imran Khan expressed his regret over the ongoing high inflation and accused the central government for implementing failed economic policies.