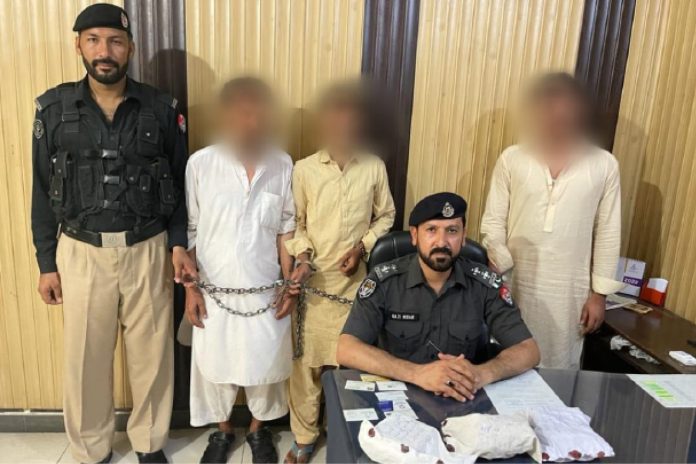 Haqnawaz Shinwari
PESHAWAR
Gulbahar’s Circle Police during it’s cracked down on drug dealers in conducted operations in residential areas of Gulbahar, Shaheen Muslim Town, and Pahndu.
The made arrests of 13 people, including a woman, allegedly involved in supplying of heroin, ice and hashish to specific customers.
During the preliminary investigation, all the accused confessed to being involved in the heinous drug smuggling from whose possession a total of 6 kg of hashish, more than one kg of heroin and 500 grams of ice worth thousands of rupees were also recovered.
SHO Gulbahar Qazi Nisar and SHO Pandu Rafiq Khan along with Ladies Police arrested 13 accused including a woman.
He said that the arrested accused were identified as Rahat Ali, Chand, Shehzad, Gul Rehan, Alam Khan, Mushtaq, Jahangir, Ikram, Tahir, Noor Khan, Yaseen Khalid and wife of Maqsood Ahmad.
The accused are the residents of Afridiabad, Shaheedabad, Zargarabad, Akhonabad and other areas of Peshawar. Separate cases have been registered against the arrested alleged drug pushers and further investigation has been launched.

Man Says he Funded PTI From Own Compnay Account