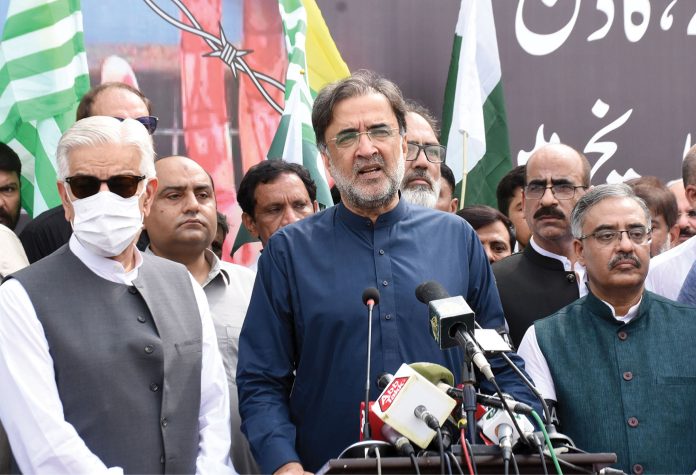 ISLAMABAD
In connection with Youm-e-Istehsal, a rally was taken out from foreign office on the constitution avenue in Islamabad today to express solidarity with oppressed Kashmiri people. People belonging to different walks of life including parliamentarians and foreign office personals participated in the rally.
Carrying banners, the participants chanted slogans in support of Kashmiri people and against the Indian atrocities. Participants expressed their anger over policies implement by Indian government on Kashmiri people to convert the valley as world largest open jail.
Foreign office played special song on Kashmir during the rally.
On the front of PM house, participants remain silent for a minute, and siren sounded when they arrived to parliament.Foreign minister Bilawal Bhutto and state minister of foreign affairs Hina Rabbani could not join the rally due to Cambodia visit. Speaking to the participants of the rally at D-Chowk, Defense Minister Khawaja Asif said Pakistan’s commitment with Kashmir is everlasting and it will never dilute because of internal situation.
In his remarks, Adviser on Kashmir Affairs Qamar Zaman Kaira said the Kashmiri people have been braving the Indian atrocities over the last seven decades and sacrificed over one hundred thousand lives.
He said every Pakistani is aware of its national responsibility and stands by their Kashmiri brothers and sisters.
Secretary foreign affairs presented the special memorials to Advisor on foreign affairs Qamar Zaman Kaira and Defense Minister Khawaja Asif.