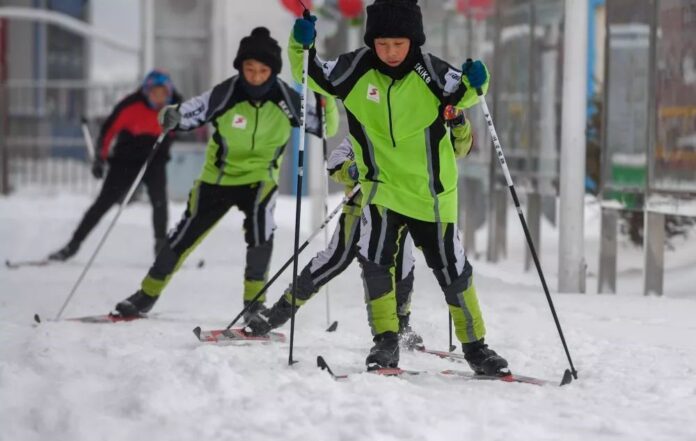 Beijing
China has involved 346 million people in winter sports since Beijing won the bid to host Winter Olympics almost seven years ago, according to a report.
This means that the country has fulfilled its vision of getting over 300 million Chinese to participate in winter sports ahead of schedule, said the report, which was released by the National Bureau of Statistics of China, entrusted by the country’s General Administration of Sport.
The wide participation suggests that the passion for winter sports ignited by the upcoming Beijing 2022 Olympic and Paralympic Winter Games not only has led to a high expectation of the people for the Winter Games, but also promoted the popularization of the sports played on snow and ice.
Northeast China’s Jilin province enjoys perfect natural environment for winter sports. As one of the earliest provinces in China to promote winter sports and relevant industries, it is at the forefront of the country in terms of both competition performance and popularization of winter sports.
Since 2018, the province has launched a popularization campaign for winter sports among primary and middle school students, to make every one familiar to at least one winter sport.
Under the campaign, primary and middle schools in Jilin province started offering cross-country skiing courses, and the first week of every winter vacation is designated as “winter holidays” during which students are encouraged to join winter sports.
Between 2018 and 2020, Jilin province has invested over 18 million yuan ($2.83 million) in running skiing courses in urban primary and middle schools, bringing the sport to more than 450,000 students.
Winter sports, and skiing in particular, have rigid requirements on the environment. They were once kept far away from the people due to a lack of facilities, high expense, and the long distance between the people and winter sports facilities. Therefore, to improve hardware and build more facilities is a prerequisite for popularizing winter sports.
A ski resort in Tonghua, Jilin province, which was built in 1959, reopened to the public in December last year after renovation. Now, the resort is surrounded by a skiing museum, an indoor ice rink and a cross-country skiing training base, which are all newly built as auxiliary facilities of the resort. It is widely welcomed by local residents as a facility that’s close to them.
Well-built sports facilities are a foundation for the national fitness program, especially that for winter sports. By learning the demands of the people, making science-based plans and improving service capabilities, local authorities across China are working to draw more people into winter sports.
Comprehensive promotion of winter sports should start with children. According to an instruction on winter sports education issued by Jilin in 2019, students are required to learn snowman building and skating in their younger years, and to learn snowboarding, ice hockey and curling as they get older, which guarantees the students’ safety to the maximum extent and introduces them to the fun of winter sports in a progressive manner, said a physical education teacher.
Mobilization efforts should be made to popularize winter sports and build up people’s health. The first national skiing champion of China Shan Zhaojian said he cares more about how the upcoming Winter Games could better promote winter sports culture and skiing in China.
Today, more and more professionals are joining the mobilization efforts to advance the development of winter sports, including Olympic champion Zhou Yang who is currently coaching adolescents in a winter sports popularization campaign in Jilin, former short track speed skater Wang Yang that started developing skates after retirement, and Olympic medalist Li Jianrou who runs a skiing club that trains children.
Winter sports have their unique charms, as well as broad prospects. It is believed that the 2022 Olympic and Paralympic Winter Games will further advance the development of winter sports in China and attract more people.

‘India can go to hell,’ Javed Miandad takes a dig at BCCI