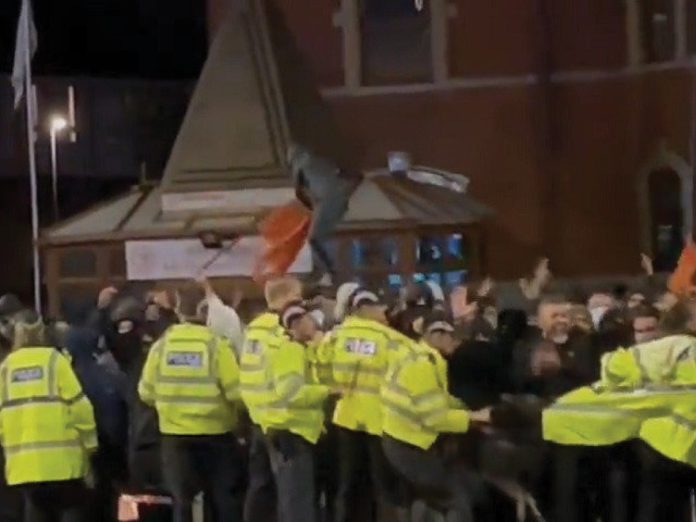 Hindu-Muslim tensions in UK
Weekend protests erupt into disorder after religious sentiments hurt
Leicester
Dozens were arrested in East Leicester after tensions between Hindu and Muslim communities hit a boiling point, police confirmed on Monday.
The unrest mostly involved young men from both communities, leading to scuffles and assaults on Saturday night, the BBC reported.
According to British media reports, an unplanned protest by Hindu men on Saturday triggered a stand-off between the two communities. The BBC reported another protest involving about 100 people that followed on Sunday, but police said there had been no further disorder overnight into Monday.
Several incidents of violence and damage had been reported to the police in the aftermath of the events.
As the policing operation continued into Monday evening, twenty-five officers and a police dog were injured, with 47 people arrested and one jailed, police said.
A 20-year-old has also been sentenced to 10 months in jail after he pleaded guilty to possession of an offensive weapon.
“We are aware of a video circulating showing a man pulling down a flag outside a religious building on Melton Road, Leicester. This appears to have taken place while police officers were dealing with public disorder in the area,” the police had said in an earlier statement.
The city’s mayor, Sir Peter Soulsby on Monday told BBC Radio 4’s Today programme that social media was exacerbating the tensions and there was “no obvious local cause” for such clashes in “an otherwise very peaceful city”.
There were also concerns that “outsiders” may have played a role in stirring up trouble between the two religious groups and at least eight of those arrested were not from Leicestershire, the Guardian reported.
Soulsby reportedly regretted the affair saying “it does suggest that there are people with other battles to fight who are coming to Leicester to fight them. It’s distressing that they choose to do it in our city. We pride ourselves on good relations between communities”.
Dharmesh Lakhani, who represents and works with Hindu temples across Leicester, confirmed one flag outside the Shivalaya temple on Belgrave Road was removed while another was burned, describing it as “unacceptable”. However, he also added that he was “proud” of a Muslim Imam who was present at the site and vowed to stand outside and protect the temple.
Lakhani, who has also been working with mosques and local Muslim leaders in the area, urged for calm and dialogue on both sides, in a city he said had long been a sanctuary for Hindu and Muslim communities – who had lived side by side for decades.
Meanwhile, the Muslim Council of Britain (MCB) has issued a statement condemning the “targeting of Muslim communities in Leicester by far-right Hindutva groups.
“We do not believe these people represent the views of wider Hindu communities, with whom Muslims and Sikhs, among others, enjoy good relations in the UK, of which Leicester, historically, is a prime example. We condemn attacks against any place of worship or symbols of religion – hatred of any kind has no place in our society.” MCB Secretary-General, Zara Mohammed added.
Yasmin Surti, who has worked with the Leicester community for 30 years, said questions needed to be asked about why the police allowed the group to march through the city, as it made many local Muslims feel unsafe. The flag removal from the temple on Belgrave Road was “unhelpful”, Surti added, in an already tense situation.