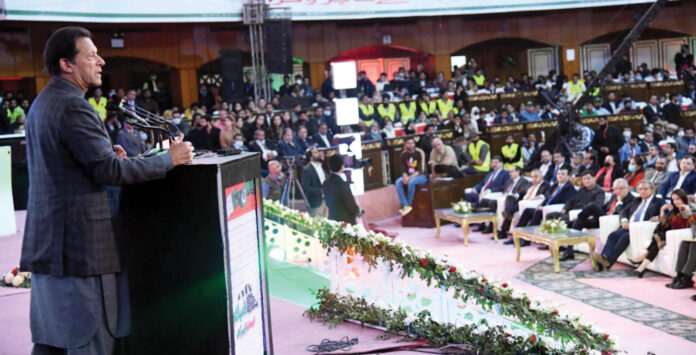 Imran Khan terms speeches by CJP, ‘convict’ in same event as ‘unfortunate’
ISLAMABAD
Prime Minister Imran Khan has said that the government is providing interest free loans to over four million families to start new businesses, besides focusing on skill development of youth.
The prime minister said this after inaugurating new projects for the welfare of the youth under the auspices of Kamyab Jawan National Youth Development Programme on Wednesday. The projects include Kamyab Jawan Markaz, Kamyab Jawan Green Youth Movement, Kamyab Jawan Innovation League and Kamyab Jawan Talent Hunt Youth Sports League.
The prime minister urged the youth to distinguish between good and bad by improving moral standards. Quoting Maulana Rumi, he said, the nations without distinction of good and bad are destroyed.
He stressed the need for character building of the coming generations as per teachings of the Holy Prophet Muhammad (PBUH). He said that Holy Prophet Muhammad (Peace Be Upon Him) founded Riasat-e-Madina on the principles of morality.
Vowing to make Pakistan a great nation, Imran Khan stressed for adopting high moral standards and checking corruption to achieve progress and prosperity.
Referring to statements of Nawaz Sharif and Maryam Safdar, Imran Khan said that instead of giving any evidence about the sources of money used for purchasing flats in London, they were abusing the country’s judiciary and army. The prime minister regretted that a convict person [Nawaz Sharif] made a speech in a function at Lahore, in which the Chief Justice of Pakistan and other honourable judges were invited.
Speaking on the occasion, Adviser to the PM on Finance and Revenue Shaukat Tarin said the young generation is an asset of a nation, adding the future of any nation cannot be bright without providing them education and health facilities.
“The developed countries of the world have educated their young generation and given them health and technical training”, he said. The adviser said that the government would use all its resources to empower the youth.
He said that countries like Japan lack the resources, but it has made its place in the world by equipping its 140 million population with education and technical training.
He said that Japan is today the world’s third largest economy.
Similarly, China and Singapore brought their people to the forefront in the field of education and skills and today these countries are developed. Today, China is the world’s second largest economy and will soon become the world’s first, he said.
Tarin said that the government has given loans of Rs26 billion to the youth through ‘ Kamyab Jawan programme. Similarly, the government has also started the Kisan Programme which will provide interest free loans to farmers, he said.
He said that according to the vision of Prime Minister Imran Khan, four million families would be provided interest free loans, financial assistance for house building and a ‘Health Card’ through Pakistan programme.
The adviser said that Rs1.4 trillion would be given to low income people in Pakistan in the next four years through all these programmes. He said that according to the vision of Imran Khan, financial assistance and good living would be provided to the deprived sections of the society, which would make the dream of the ‘State of Madinah’ come true.
On the occasion, Minister for Planning, Reforms and Special Initiatives, Asad Umer said that the Kamyab Jawan Programme has given loans of billions of rupees to empower the youth. He said that there is a difference between kings and leaders. Leader thinks of generations and Imran Khan is formulating policies thinking about the future of the young generation.