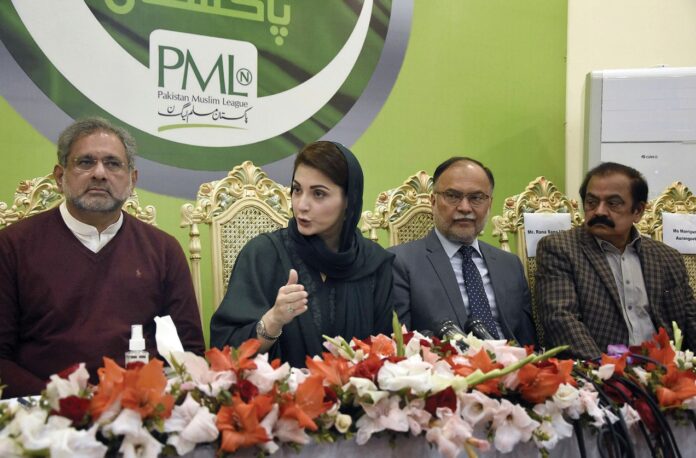 Maryam asks Saqib Nisar
ISLAMABAD
PML-N vice president Maryam Nawaz has said former Chief Justice of Pakistan (CJP) Saqib Nisar should tell who had forced him to punish Maryam Nawaz and Nawaz Sharif.
“Former CJP murdered the justice. His leaked audio is confession of sins. The judiciary should not bear the burden of former CJP sins and it should isolate itself from this matter. It is in the hands of judges to administer justice to Nawaz Sharif and wipe this taint from their face”. She said this while addressing a press conference here Wednesday.
She held forensic of the audio has been got done from leading US institution. They had said therein this audio is not edited. When video came to open then Saqib Nisar said this is not his audio. Later he accepted it with the help of a channel saying this audio has been evolved in distorted way. Saqib Nisar will have to speak the truth tomorrow if not today. Saqib Nisar audio is confession of sins.
The system of nature has come in action against his conspiracy.
She remarked “ who said to him Imran Khan has to be brought to power. Tell us who forced you to award punishment to me and Nawaz Sharif.
Why you were forced to take illegal steps. Who was that to whom you could not refuse being CJP.
Unfortunately the institutions give our decisions, she said adding in audio he said Nawaz Sharif will have to be punished if Imran Khan has to be brought. His daughter should also be punished.
“I want to say that tv channel which is propagating tell us the sentences which it is hiding and guide us. These sentences were expressed by Saqib Nisar in what speech.
She underlined if Justice Shaukat Aziz had leveled some allegation wherein you had admitted . If that video is false too.
She underscored that Justice Khosa had said at that time that this decision is black spot on the face of judiciary. You excluded that judge but the decision is still there.
The affidavit of Gilgit-Baltistan judge had come to open wherein he had said CJP telephoned someone wherein he said that bail should not be granted to Maryam Nawaz and Nawaz Sharif before election.
“There may be some doubts about audio or videos, but former chief justice of Gilgit Baltistan and Justice Shaukat Aziz are alive. Both of them can be inquired in person” Maryam said, while adding that this was the ‘fifth testimony’ in favor of Nawaz Sharif and PML-N.
Reiterating her stance regarding Panama papers investigations, PML-N vice president said that 450 persons were mentioned in the panama-papers scam, but only Nawaz Sharif was ‘punished’ whose name didn’t exist in the revelations, she said.
Maryam urged judiciary to ‘not to bear burdon of Justice Saqib Nisar’s sins’. “Judiciary should separate itself from the matter. It’s up to the highest judiciary now to serve Nawaz Sharif with justice and prove itself unbiased” she categorically demanded.