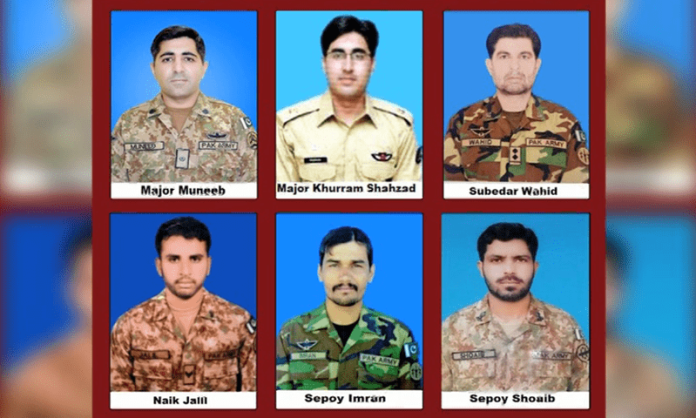 RAWALPINDI
The Inter-Services Public Relations (ISPR) said on Monday that six Pakistan Army officials, including two majors, were martyred after a helicopter crashed during a flying mission in Harnai, Balochistan.
According to military’s media wing, all six personnel on board, including two pilots, have embraced martyrdom. The ISPR informed that the martyred officers and soldiers included Major Muhammad Muneeb Afzal (Pilot), Maj Khurram Shahzad (Pilot), Naik Jalil (Crew), Subedar Abdul Wahid,
Sepoy Muhamad Imran, and Sepoy Shoaib.
The Military’s media wing further mentioned that more details were to follow. However, as per the details of the Shuhada (martyrs) Major Khurram Shahzad (39) was resident of Attock, married and had a daughter, Major Muhammad Muneeb Afzal (30) was resident of Rawalpindi, married and bore two sons, Subedar Abdul Wahid (44) was resident of village Sabir Abad, Karak who was married and had four children including three sons and a daughter, Sepoy Muhammad Imran (27) was resident of Makhdoompur, Khanewal, married and had two daughters and a son, Naik Jalil (Crew) was 30 years old and resident of village Bhutta, Lohara, Tehsil Kharian, District Gujrat, married and had two sons. Sepoy Shoaib (35) was resident of village Khatarphatti Post Office Syeeda Tehsil Jhand, District Attock, was also married and had a son.
President Arif Alvi and Prime Minister Shehbaz Sharif have expressed grief and sorrow over the helicopter crash in Harnai. In their separate statements, they prayed for higher ranks for the personnel martyred in the incident.
In his statement, President Dr Arif Alvi has paid tribute to the officials of Pakistan Army who laid down their lives in the line of their duty. He also prayed for the grant of patience to the families of the martyred troops.
In a tweet, Prime Minister Shehbaz Sharif has expressed deep grief and sorrow over the martyrdom of six army officials including two pilots in a helicopter crash in Harnai, Balochistan. He said the entire nation was grieved over the loss of lives of the troops and their families.
The prime minister prayed for the departed souls to rest in peace and for the grant of patience to the bereaved family. Minister for Information and Broadcasting Marriyum Aurangzeb in a statement expressed grief and sorrow over the martyrdom of personnel of Pakistan Army and said the entire nation salutes the great sacrifices of its martyrs.
Interior Minister Rana Sanaullah has also expressed grief and sorrow over the martyrdom of Pakistan Army’s personnel in a helicopter crash in Harnai. In a statement today, he said those rendering sacrifices for the security of the homeland are benefactors of the nation.
Chief Minister of Balochistan Mir Abdul Quddus Bizenjo expressing sorrow over the crash of a helicopter said the entire nation pays rich tribute to those who sacrificed their lives during performing duties. The Chief Minister prayed for departed souls and expressed sympathy with bereaved families.