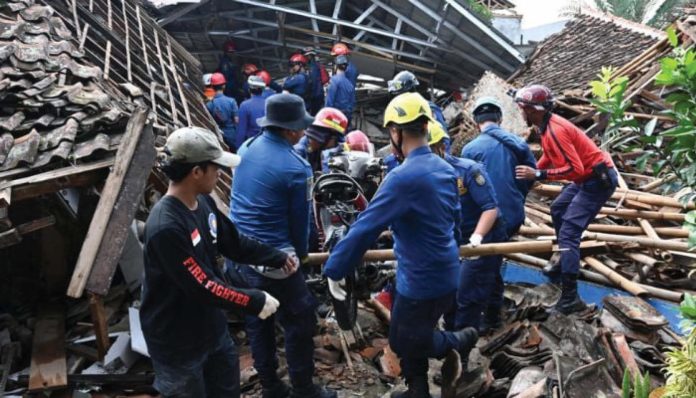 KUALA LUMPUR
A seven-year-old Indonesian girl who was the subject of a day-long rescue effort after an earthquake killed hundreds in West Java has been found dead, rescuers told AFP on Friday.
Emergency workers found the body of Ashika Nur Fauziah, also known as Cika, under rubble in the worst-hit district of Cianjur town (the epicentre of the quake that triggered landslides) collapsed roofs and walls and buried victims in mounds of earth on Monday.
“The body was immediately handed over to the family,” 28-year-old rescuer Jeksen Kolibu told AFP. “The family was very sad,” he added.
Dozens of rescuers had spent most of Thursday using digging tools, hammers and their bare hands to clear debris in the delicate mission, which was suspended overnight.
Cika was found under three layers of concrete on Friday morning, said Kolibu. Workers found her face-down, encased by debris, with little space to breathe.
Rescuers covered her face and put her into a bodybag as her father Ahmad watched on, holding his head in despair. He did not utter a word as she was handed over to him.
Cika was buried at a nearby cemetery less than an hour after being found. At the funeral, a cleric tried to calm a visibly emotional Ahmad.
Cika was then wrapped in a white sheet and lowered into the ground by three men as exhausted volunteers and firefighters watched.
The focus of the search had been the girl’s grandmother’s house, across the road from the family home, where her mother believed she had been playing when the earthquake struck.
“She was playing outside, I was cooking in the kitchen, suddenly the earthquake happened, so fast, only two seconds, my house collapsed,” her mother Imas Masfahitah, 34, told AFP at the scene on Thursday.
“Whatever happens, I will try to accept it,” she added, crying as she held her daughter’s sandals.
Hopes of a happy outcome had been raised following the dramatic rescue of a six-year-old boy, Azka, on Wednesday evening, which was described as a “miracle” after he survived more than two days in the rubble without food or water.
“The mother was very hopeful. Azka survived, while Cika didn’t. That’s what makes me sad,” rescuer Kolibu said.
The most recent official death toll from the quake was 272.
Before Cika was found, authorities said 39 people were still missing, as hammering rain and potentially deadly aftershocks hampered the rescue effort.
But Henri Alfiandi, head of the national search and rescue agency, said 13 bodies were recovered on Friday.
“The problems are the unstable soil, the thickness of the landslide pile aggravated by continuous rain and the concerns of aftershocks,” he told broadcaster Kompas TV.
He said the emergency period for the search and rescue effort would last a week until Monday and authorities would evaluate if it needed to be extended if all the missing had not been found.
Many of those killed in the quake were children, some in classes at school, according to officials.
More than 2,000 people were injured, 56,000 houses were damaged and more than 62,000 people were forced to evacuate to shelters, leaving many homeless without adequate supplies.
Indonesia experiences frequent seismic and volcanic activity due to its position on the Pacific “Ring of Fire”, where tectonic plates collide.