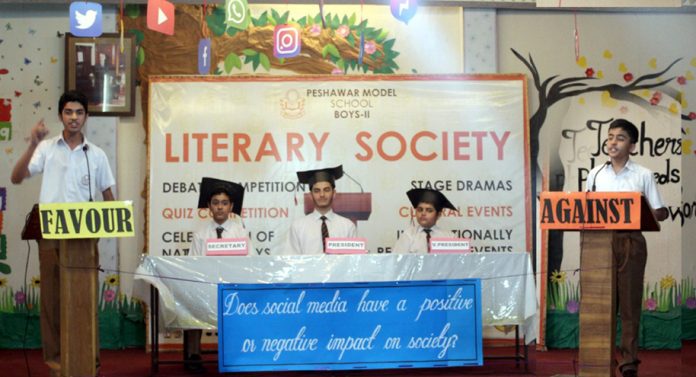 Peshawar
A declamation contest was held on the topic ‘the positive and negative effects of social media on society’ in PMS boys 2, Warsak Road Peshawar.
The contesters were the 8th class students who spoke in favor or against the topic. They express the use social media is the basic need of the hour; we should be care about while using it. It is also need of the hour to create awareness among the young generation about social media positive or negative effects.
On this occasion PMS director Asad sethi, teachers and the large number of students were also present.
Later on the vice principal Farmanullah gave away the certificates to those who stood the first (Usman Farooq) , second(Fasih ul Hassan, M Jalal Nasir) and third (M Saad,Sardar Idrees) in the contest. The judges of the contest Waqar Ahmad and madam Wahida while the president Qazi Faker, naib president Zuiz and M zaki while stage secretary was madam Anshal. The event organized by vice principal Lubna Aamir and Syed Ammd Gillani.